We received these photos emailed from Ali yesterday - Andy has really been able to crack on with the painting over the last week as the temperatures have at last been high enough. And doesn't it look great? (battleship grey never was my favourite colour!) The red and grey are still undercoat, but the black is the first of the top coats. The cream on the roof is finished, I think, but I can't quite tell from the photo if Andy has put the non-slip on yet. Not sure about the cream on the cabin side - I can't tell if it's top coat or undercoat. We will be going over again next Tuesday, so will find out then. 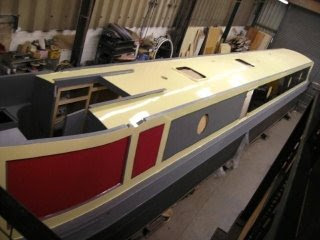 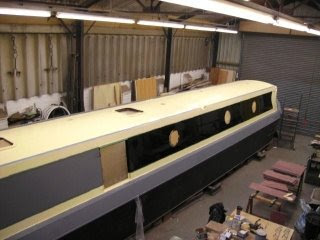 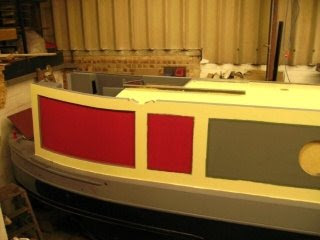 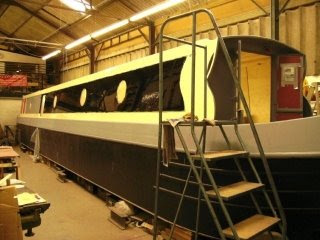 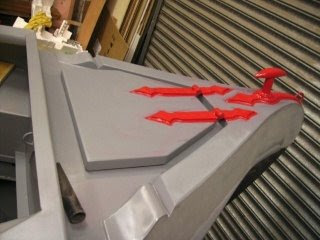 Just a few more photos from our quick trip to Beacon today - made so that our son Russ could inspect progress!!! 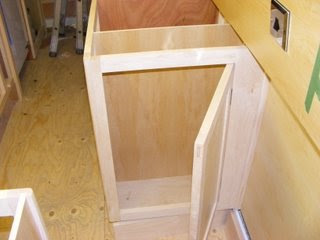 This is the small cupboard on the end of the sink/drainer run that I will use to store small foodstuffs. 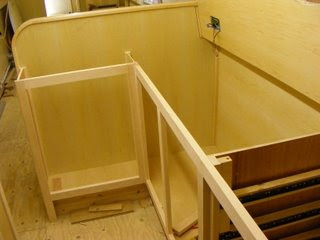 The cupboard run that will house the hob - it will have set of 5 drawers, a large double cupboard, and another small cupboard for more foodstuffs at the end - and only a small corner space that will be easily accessible. 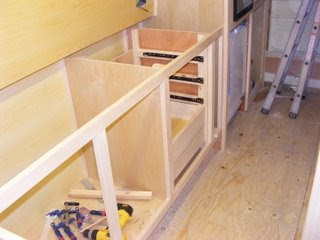 The same run, taken from the other end 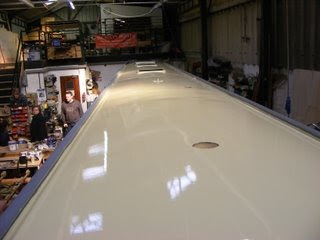 At last - the weather has warmed up enough to start the painting - the roof is almost completed, just waiting for it's coat of anti-slip paint. Andy has started to mark up the cabin sides and will be starting on them next week, temperatures permitting. 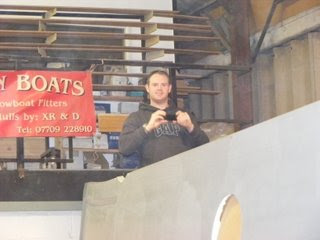 Our fortnightly visit to Beacon took place yesterday, and we were pleased to find that the galley is taking shape now. All the appliances have now been delivered so Neil could get on building the cupboards. 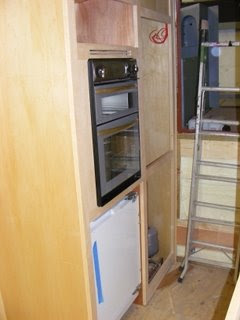 The oven and grill, with the fridge underneath - the fridge is 'integrated' - so it will have a door that matches the rest. In the corner is the calorifier cupboard - the top part will be split into two - a wet cupboard and an airing cupboard 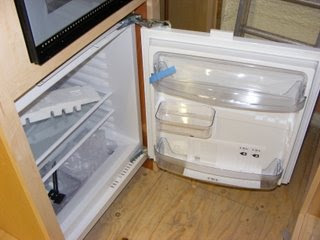 The fridge (aka 'the beer cupboard') 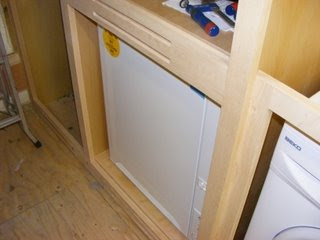 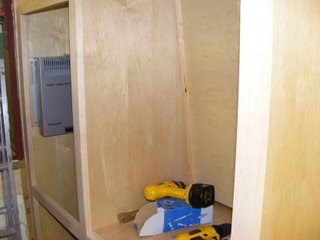 Big cupboard over the dryer - for all sorts of stuff, but not food as it may get a little warm! Originally washing machine was going to go in the bottom of this cupboard, with the dryer above it - but the washer proved to be just a little too deep, so we had to have a re-think. The washing machine and dryer cupboards will also have matching doors, although we may have to leave the ones on the dryer cupboard open while the dryer is in action - Neil has put loads of air grills and holes in the sides and back of the cupboard, so hopefully it will stay cool enough to leave the doors closed. 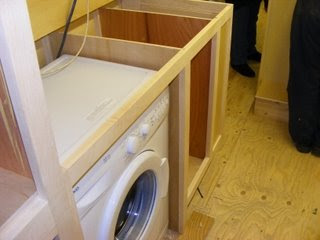 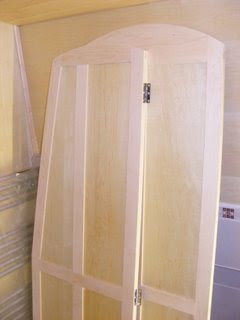 The shower room doors which Rog forgot to take a photo of last time, leaning against the bulkhead out of the way. 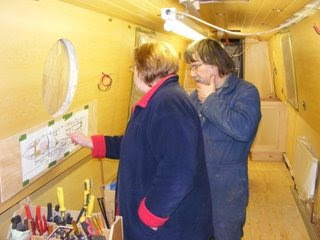 Neil and I deep in discussion about something! Captions please!

We also went up to Whalin Upholstery at Pinxton, north of Nottingham to choose the fabric for the dinette - there were so many to choose from that it was a bit daunting, as we hadn't really even got an idea what colour we wanted. We finally settled on a wine colour with a figured flower (a lily, I think) in a beigey colour, with a chenille type feel to it - difficult to describe, and, as usual, we forgot to take a photo! We did fall in love with a much paler fabric with a terracotta lily, but, with Cassie around, we knew it wasn't practical so we reluctantly discarded it.
We will be back at Beacon on Saturday, as our son has decided that he's coming home for Mother's Day, and wants to see the boat, so hopefully, more pictures then.
Posted by Pip at 15:09 3 comments:

Our latest trip up to Beacon and we found that lots of handles have appeared on our cupboards, and very nice they look too! The bedroom is almost complete. All that remains to be done in there is for the over-bed cupboard to be put in, and for the reading lights to be attached. 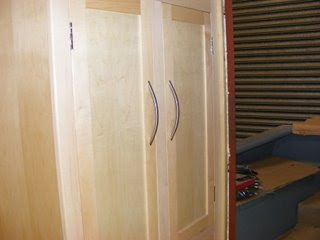 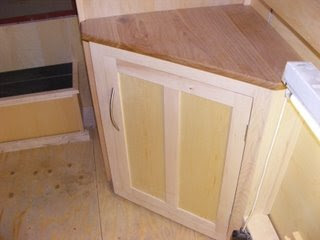 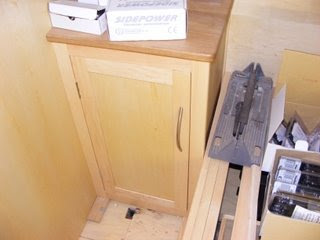 The small basin that we chose when we went to Midland Chandlers was in place inset into the vanity unit in the shower room. This is also almost complete. The tiling around the basin and on the vanity top needs to be done, the loo only needs to be put in place, and the shower unit assembled and put in place. All the plumbing is there, as is the shower mixer tap etc. The shower unit gets in the way a bit when they are carrying stuff up and down the boat, so they tend to put that in towards the end of the build. The door between the bathroom and the bedroom has been made, but not yet hung, but no photo of that as 'himself' forgot to take one! Neil was about to hang it when we arrived, so that would be his next job when we finally left him to get on. 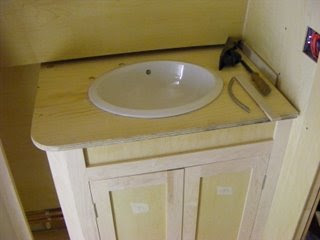 The dinette is now finished, also the bits to make it into a spare bed. Neil has made a very clever 3 fold frame which fills the gap, and then 3 boards to make the sleeping platform. I have to admit that when I first saw it folded up and leaning against the side I thought it looked a bit Heath-Robinson-ish, and complicated, but when Neil showed us how it went together, it's a piece of cake, takes about 30 seconds and is sturdy enough to hold even the most energetic of visitors!!! He made the sleeping platform boards in three parts so they would store away under the dinette bench easily, and not be too awkward or heavy to handle. The man is a genius! There is a drawer in the return part of the 'L', with the Shoreline 12v freezer inside. 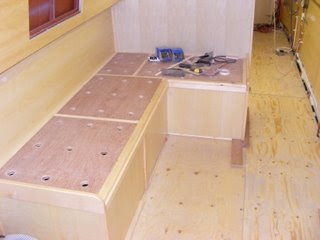 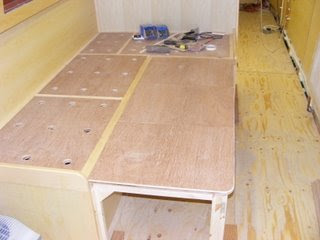 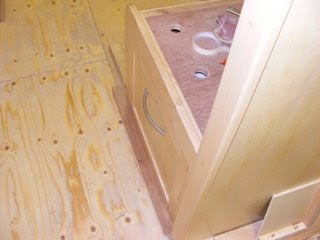 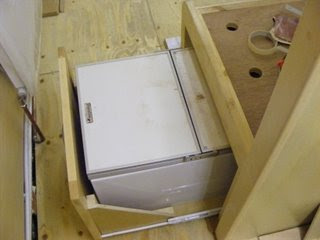 and open
And last, but not least, the front step is made, although I've made more work for Neil because the first riser is a bit high for me. We discussed options and because of the cupboard doors he can't now change the level of it, so he's going to put another little step in front of it, as there's loads of room. In the photo it looks as if the height from the step to outside is bigger, but I think that's an optical illusion caused by the angle of the photo, and because I am stepping out over the lip and then down again a few inches, it doesn't seem so high. 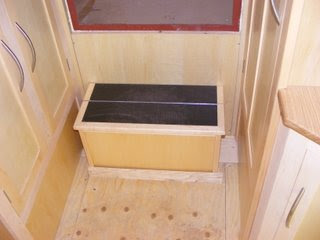 The next job on the agenda, according to Neil, is to make the other door (from the saloon into the bathroom) and then begin on the corner boatman's cupboard for the saloon. This idea is blatantly filched from Nb Caxton, but mine will be a bit different as it will have a glass door on the top cupboard, so I can display my small collection of pottery jugs, without which the boat won't feel like home! "Glass door!!, pottery jugs!!" I hear you cry, as you throw up your hands in horror! "What happens the first time you misjudge the entrance to a lock? The whole lot will come crashing down" Well, I've thought of that - it will be toughened glass, with a lock to stop the door flying open, and the jugs will be stuck down on the shelves with sticky pads. If, despite efforts to the contrary, it does all end in disaster, we will have the door replaced with a solid one, and if any of the jugs have survived they will have to be found another home.