Oh the wonderful world of boatyards….NOT!

Months ago we booked Windsong into the boatyard at Gayton Marina where we moor to be craned out and have her bottom blacked.  The 5th April was to be the day.  A few days before that we received an email to say that repairs to their crane had been delayed and they were having to reschedule everyone’s bookings.  The next earliest date we were offered was next Thursday, 18thApril.  We phoned them this morning to confirm that it was all going ahead.  Yes, you’ve guessed it – the crane repairs have been further delayed and it will now be around the beginning of May – we haven’t even been given a date this time!!!!  To say we are pissed off is probably putting it nicely!!!  I had a ring around but of course nobody can fit us in before then.  Oh well, such is boating.  However, if it doesn’t happen then, it can bloody well wait until the autumn!!!

A visit to nb Yarwood….

Having missed Lesley and Joe on Yarwood coming up the Northampton Arm on their great escape from their winter prison on the middle levels lat week, we made arrangements to go and see them at Braunston today.  Having arrived at their mooring above the top lock we had coffee and a catch-up – we haven’t seen them since Yarwood’s launch the December before last.  Ozzy was well and truly fussed over by Lesley and Joe, and well and truly told of by Fletcher (or was it Floyd – I still can’t tell the difference!), Ozzy then went on to disgrace himself by cocking his leg on one of Lesley’s galley cupboard doors (he hasn’t had any ‘little accidents’ indoors for about 6 months!!).  Not the least fazed by this, Lesley just shrugged her shoulders and wiped it up (thank goodness for ‘doggy’ friends)!   After our coffee we wandered along the towpath to say hello to Jo and Keith on nb Hadar.  Jo was busy shovelling coal around the hold, so we had a chat and gave her the excuse to have a break.  By that time, lunch and the pub were calling, so we took the dogs for a little walk back along the towpath to the Admiral Nelson.  We had lovely baguettes, and the accompanying chips were to die for. Ozzy meanwhile had a cow’s ear which was stolen by Fletcher (or Floyd!) so we had to give him another, which was also stolen!  Having been growled at earlier, our little hooligan was too scared to take it back so Joe had to retrieve it for him!  A good time was had by all!!  Afterwards, we made tracks for home as Rog had already made plans to attend a ‘vaping’ get-together at a local pub. 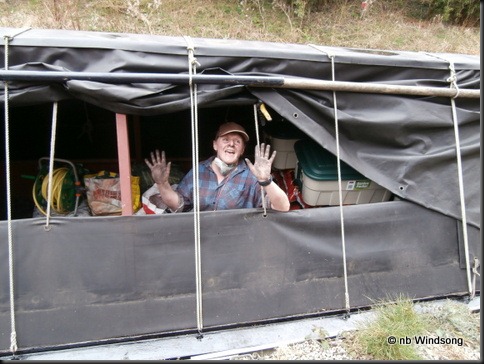 Jo doing her impression of a Black and White Minstrel! 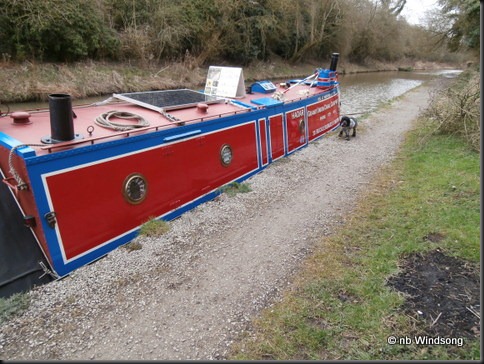 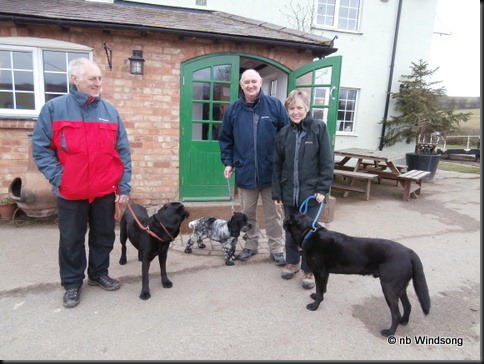 Lesley, Joe, Rog and the dogs outside the Admiral Nelson.