that remind us why we do it!  On Thursday morning we left our mooring near The Bridge.  It was bright and sunny, with wall to wall blue skies.  We started off in T shirts, and that’s how we remained until later on in the afternoon. 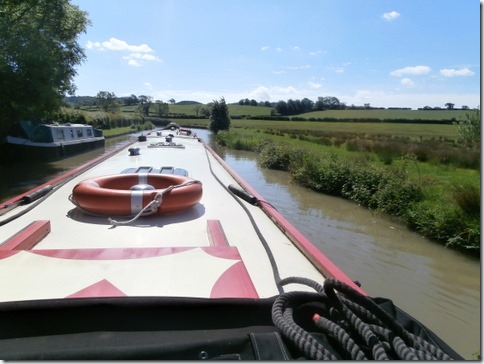 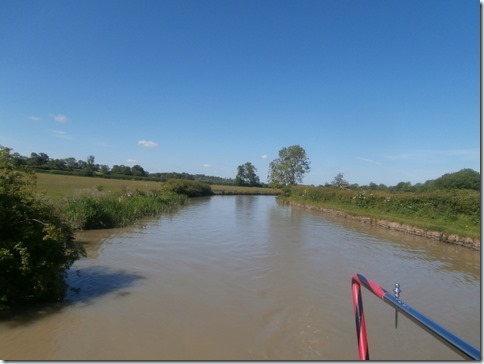 We decided that we would moor short of Hillmorton and then carry on to Brinklow today.  We came through Braunston without the usual jinking about around other boats, and then moored at the same place near Willoughby that we moored on the first night out.  As we were tying up, Ozzy did his usual leap straight off the boat and charged up the towpath towards another dog, which looked somewhat familiar!  I then looked at the boat moored some way in front off us, and then at the couple sitting in chairs on the towpath.  Meanwhile, they were also looking at us!  It was Moni and John on nb Holly, that we met last year and spent some time with.  What a lovely surprise!  We hadn’t expected to meet up with them on this trip.  Needless to say, we spent the afternoon with them.  They had planned to continue on to below Hillmorton after lunch, but they changed their minds. 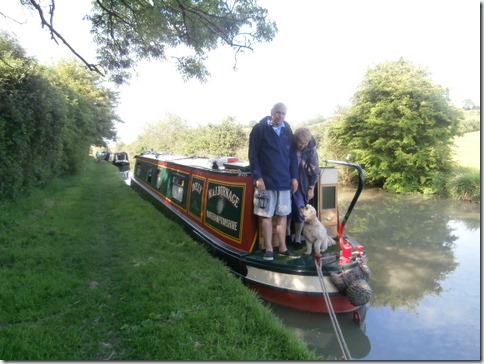 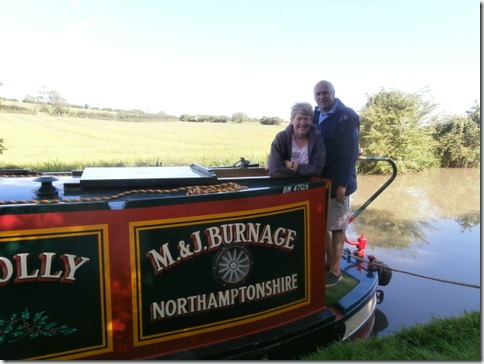 We sat on until late afternoon, by which time we were in the shade, and the wind became a bit nippy.  Today was very cloudy when we first left our mooring, Moni and Ollie came with me and Ozzy for a walk for a little while, and then returned to Holly when Rog picked me up.  They then continued on their way – we had another brief word when they arrived at at Hillmorton Top Lock as we left.

We carried on to Brinklow our mood getting gloomier and gloomier.  Although there was no real rush for us to come home, my foot is playing up so much that I really do need to try and get it sorted.  It’s not a lot of fun, limping around the locks, although Rog did his fair share, standing on the back of the boat steering was painful for me too!

We are back at home now, and will go back to the Marina tomorrow or Sunday to collect the stuff we couldn’t fit in the car today.

So, here endeth our 2015 cruising – at least for a while.  Hopefully if my foot improves with some medical treatment, we may get out again later on in the summer or early autumn.

Having left Twyford Wharf on Sunday morning, and moored just short of Cropredy, we continued on yesterday to Fenny Compton.  The wind got increasingly strong during the day, and we got caught in ne or two heavy showers.  As we arrived at Fenny, the heavens opened once more, the wind rose to gale force and we had horizontal hail!  While we were mooring a couple walked by with suitcases.  Suddenly, the chap turned and said ‘Roger’?  It turned out to be a very old friend (and his wife) that Rog had met on his Air Traffic Controllers course in 1986!  A short chat, and we found that they were loading up their boat for a few weeks out.  Needless to say, an arrangement was made to meet a bit later on in the pub.  2.30 saw us all safely ensconced out of the foul weather.  A great deal of beer, chat and laughter later, we decided it would be rude not to take advantage of the pub’s 2 meals for a tenner, so we did!  Sara and I left the pub at just after 8 pm, with the men following shortly after – they had decided that they had had enough beer already and didn’t succumb to the temptation to have just one more pint.  I can’t remember the last time we spent all afternoon in the pub!

The wind still being horrendous on Tuesday, we decided to stay where we were for the day.  Pete and Sara are continuing with their preparations for leaving on their trip, so they came for a coffee, and then went off in the car.  We planned to meet up again later.

After another few beers in the pub we said our goodbyes.  We did think we might see them again today (Wed) but we were away earlier than them, and they have stopped at The Folly below Napton Locks, and we are moored 10 minutes further on at the Bridge pub.  It’s been a lovely day today, a little cloudy at times, but hot when the sun has come out.  A little chilly in the breeze still, but it’s great to see the sun!  Even better tomorrow, so the weather forecast says.

A week with the girls…..

We set off on Monday morning and stopped at Aynho Wharf for fuel, water, loo emptying, postcards for Flo to send and souvenirs of Flo’s trip – she bought a key ring with a boat that she thinks looks a bit like ours. Flo and I then continued up the towpath to give Ozzy a walk whilst Rog finished off at the Wharf. 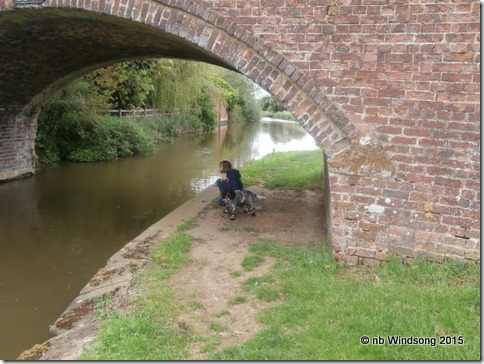 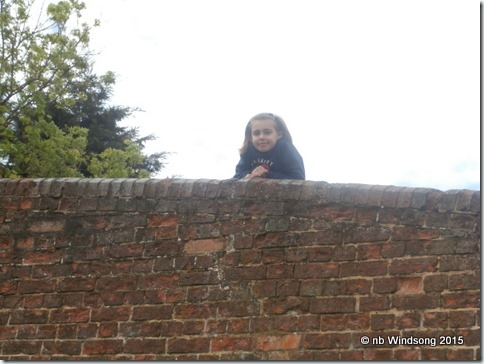 Waiting to be picked up

First lock was Somerton Deep Lock – we were 4th in the queue, so quite a long wait 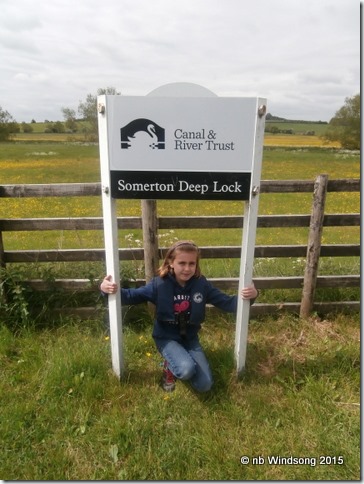 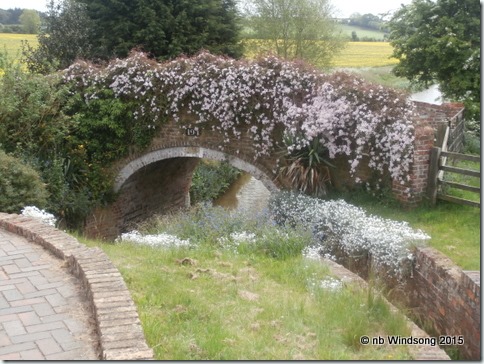 I love this lock, it’s so pretty with Clematis growing all over the bridge and gypsophilia (probably spelt that wrong!) along the wall.

Flo opted to stay with Rog and go down with the boat. 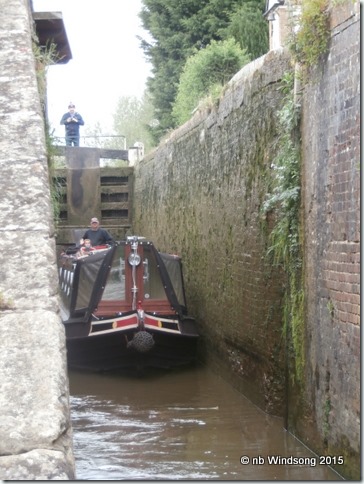 About to exit the lock

Bacon butties were in order afterwards and we continued on towards the Heyfords – we stopped a bit earlier than planned as we found a decent mooring spot.  Flo played with Ozzy for a long while, then we had a game of Scrabble which Flo didn’t really enjoy!

Tuesday turned out to be a longer journey than expected as we’d planned to moor around Lower Heyford but it was skanky, so we continued on.  Unfortunately there was nowhere to moor between there and Thrupp, so we ended up on the visitor moorings at Thrupp – the first time we have been able to moor there.  Of course it would have been rude not to sample the pub, so we took Flo to The Boat for a very late lunch.  It was excellent – in fact we couldn’t eat it all, so we brought some chips back to the boat, re-heated them on the oven and had chip butties for tea – yum 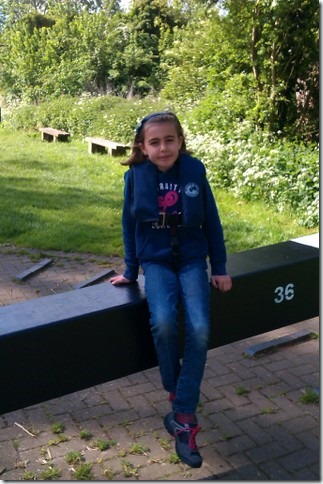 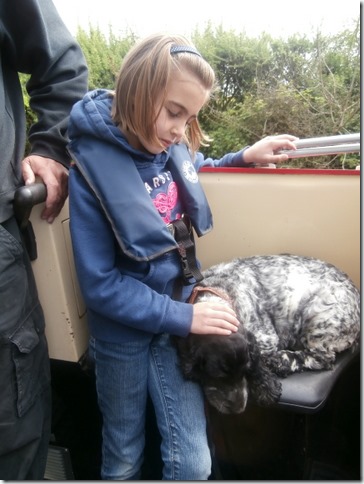 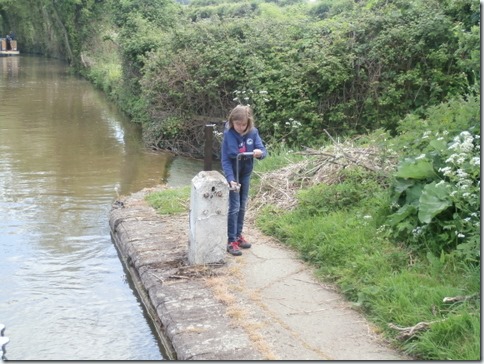 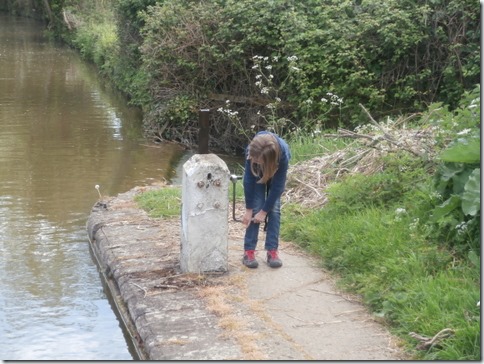 Handy to have a lock buddy 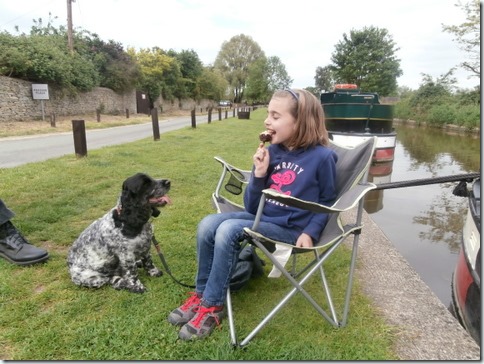 On Wednesday morning we reversed back to the lift bridge at Thrupp and then moored on the services to fill with water, empty the loo cassettes (it’s amazing how quickly one little girl can fill one!).  Emma arrived shortly afterwards with Milly and Lizzie, and we did a quick turnaround as we didn’t want to hog the waterpoint for too long.  We said goodbye to Flo and welcomed Milly on board.  Again we had quite a long trek back to decent moorings for the night, moored where we were on Monday night. 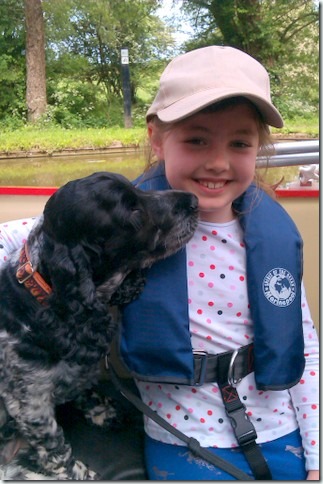 Milly did so want to help with the locks, but she wasn’t quite strong enough, so she sat and ‘supervised’ Grandad! 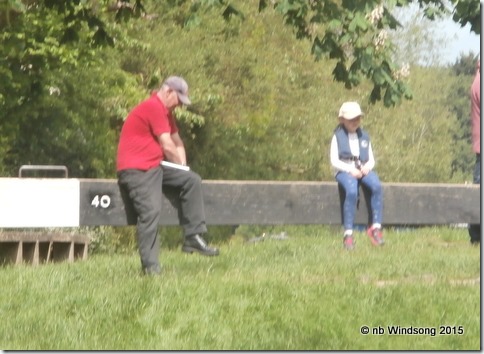 On Thursday we headed for Aynho, where we did what was necessary to service the boat yet again!  We managed to get a mooring quite near the bridge, and went to the shop so Milly could take her turn at buying souvenirs.  Then of course, we just had to go to the pub for lunch – again! Back at the boat,Milly and I played Scrabble (she didn’t enjoy it either!) so we dug in the cupboard to see what other games we could find, and settled on Yahtzee – we played the best of three games and I won 2 of them.  But she determined to beat me again before she left.

On Friday we headed for Twyford Wharf where we had arranged to meet Emma and Ben to hand Milly back.  The weather was foul – cold and windy with torrential rain showers, and poor Milly had to remain inside the boat – Rog and I got absolutely soaked just doing the locks.  Luckily it was a shortish journey and by lunchtime we were moored and inside drying off.  We had dashed to the Farm Shop at the pig farm and treated ourselves to some of their delicious bacon from the farm’s Tamworth pigs, so we had bacon butties for lunch.  Milly then insisted that she get her own back at Yahtzee, and beat me at all three games! 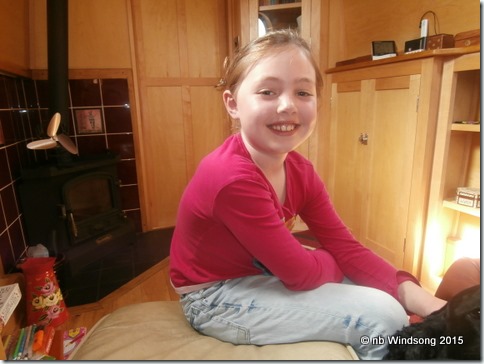 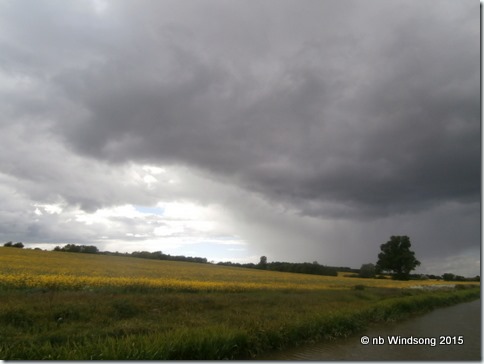 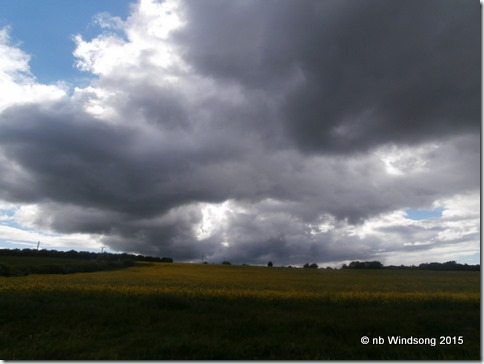 The sky was pretty spectacular most of the afternoon with continuing heavy showers. 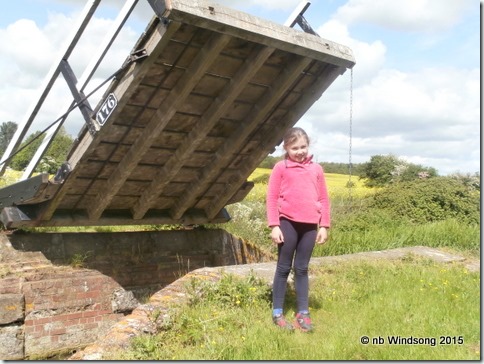 The weather was much better this morning, still breezy and chilly, but at least we had intermittent sunshine.  The rest of the family arrived around mid-day and Emma and Ben had brought lots of yummy goodies for lunch.  We sat and had a picnic on the towpath, and a good old natter, which was lovely, and the girls ran up and down with Ozzy.  All too soon it was time for them to head back home.  The boat feels very quiet and empty now, and Ozzy is sunk in a deep depression that he’s lost his playmates.  I keep catching him standing staring up the towpath in the direction they went, hoping that they might return. 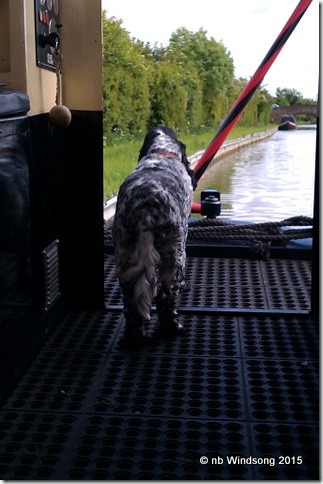 We’ve had a lovely week and I hope the girls have too – Emma says we have to have them both together next time, she’s seen far too much of the M40 this week!

We are now about to turn on the telly and Rog will suffer through the Cup Final, in the faint hope that the Villa will beat the Arse!