We had a pleasant and uneventful day’s cruising today, no rammings or bum cleavages to report.  We set off around 9.30 am from Norton Junction and made good time to Watford Locks.  No delays here, we were straight up the first 2 locks and then just a few minutes wait for the first of the staircase for a boat coming down.  The ‘lockie’, Phil, was a chatty sort, and accompanied us up the staircase – I had the tiller as it was about time Rog did some work!  These locks are always a real pleasure to work, after the horrible ones in the Buckby flight.  I allowed Rog to drive the boat into the last lock, as it was a bit windy!  We made full use of the ‘felicities’ at the top to fill with water, dump rubbish and other ‘unmentionables’, and were on our way just after 12.30. 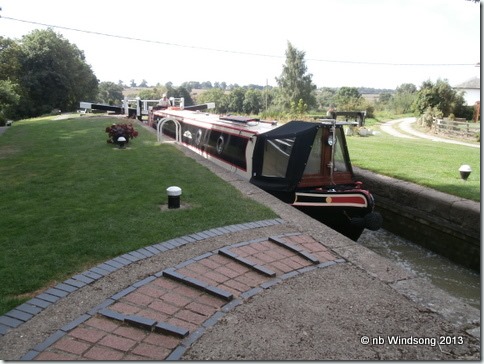 In the last lock at Watford

Next was Crick tunnel, and we only met one boat when we were almost through.  His headlight was broken and he was shining a torch down the side of the boat, although we could see him perfectly well.  Crick itself was quite busy with moored boats, almost all the visitor moorings were taken.  Then out into the quiet and peaceful countryside.  We had a slow trip for a while as parts of the canal are very overgrown, passage reduced to a single boat’s width in some places – of course we met one coming the other way in the narrowest section! 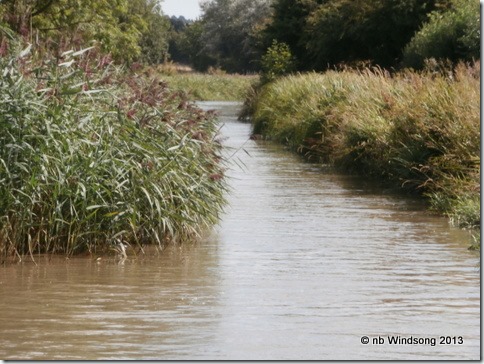 One of the narrower bits

We are moored now in probably one of my most favourite mooring spots on the whole system – just below Downtown Hill.  It’s a lovely spot – this is the third time we’ve moored here and it’s always empty – goodness knows why?  Not much of a view from the mooring itself, but from the bridge just behind us you can see for miles! 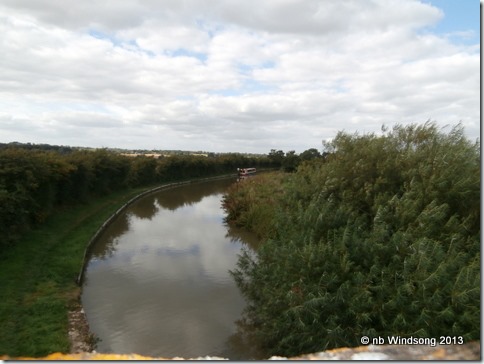 That’s Windsong in the centre of the picture 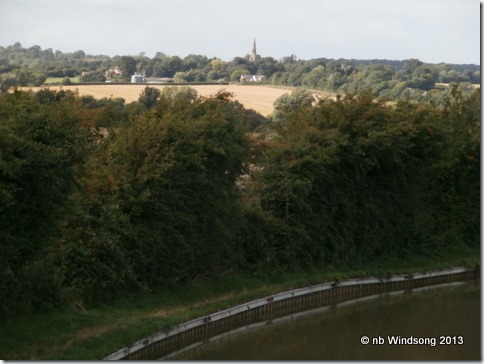 One view from the bridge 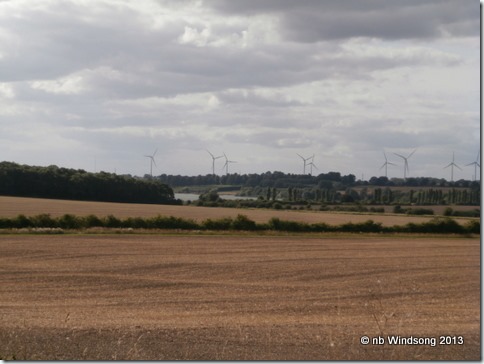 Another view a little further over, with the reservoir and wind farm in the distance. 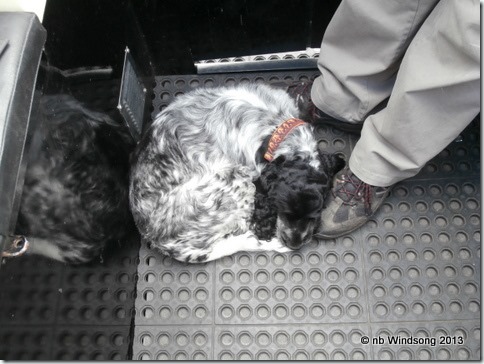 And lastly, Ozzy seems to have settled!

We set of around 9 am this morning, and filled with fuel at Stowe Hill Marine.  Not long after that we came across a canoe, paddled with two bits of wood nailed together, by an very dirty chap in a hoody.  As we passed him he leaned forward to peer at something in the well of the canoe, exposing a very large amount of extremely grubby bum cleavage!  Not really what I wanted to see – oh well, it takes all sorts! 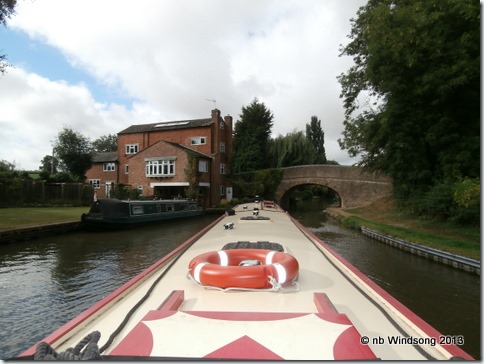 We proceeded on, through Weedon Bec and then to Wilton, the first of the seven locks in the Buckby Flight.  We worked the first couple on our own, but soon realised that there was a boat following, so we waited in the third lock for them to catch up.  We then shared the work for the rest of the locks.  They were a lovely trio, on nb Kantara.  A couple and a friend, on their way back to Yelvertoft Marina.  It was a pleasure to share with such delightful people.  They also blog, so we agreed to look up each others blog.

We are moored now at Norton Junction just into the Leicester arm. 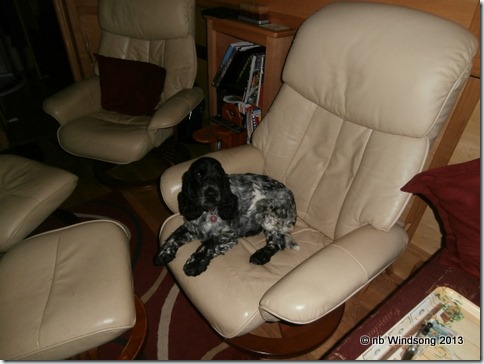 Ozzy making himself comfortable in my chair

Ozzy didn’t disturb us all night last night so he was obviously okay.  He still seems a little confused however, and didn’t think much of being shut in the boat while we worked the locks.  Unlike Cassie, he is obviously not ‘lock savvy’ yet, it will probably be a year or two yet before I can take him with me when we are locking and trust him not to wander off, get into trouble, or, worst of all, fall in the water!  I did take him on his lead and tie him up while I worked the lock, but he made such a fuss when I walked away to open the paddles at the other end, that I put him back on the boat as soon as it was up the lock.  Still, it’s only his first trip so we can’t expect too much all at once.

We’re off!  After much running around this week, we finally left the marina at about 1 pm for our trip to Barrow on Soar and the Beacon Boats gathering.  It’s been a long old summer, stuck in a cast and then getting my wrist to work properly.  We decided not to go too far today as we are well out of practice, and also we knew if we didn’t moor up around Weedon somewhere, we’d end up having to go all the way to Wilton and moor on the M1 (it might as well be on the motorway, you’re that close!) So we did a couple of hours and moored up near Furness Wharf, Nether Heyford being the nearest habitation.  On the way we passed nb Willow Too, Beacon’s latest boat to be launched.  They are just out for the weekend, still being tied to the marina by the ‘W’ word.  We stopped for a quick chat, and said we’d see them at the gathering – they are going by car just for the day. 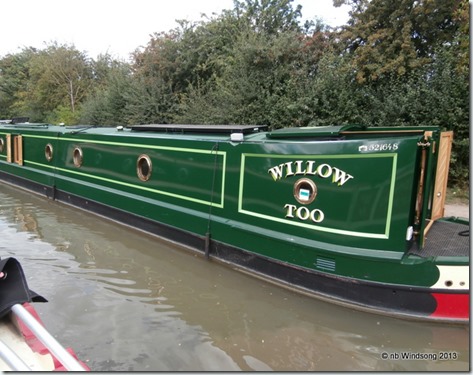 Not long after we’d moored, we were sitting out on the bank in the sunshine, enjoying a much needed cup of tea, when we were rammed from behind – the ‘youth’ that was steering the other boat panicked when he turned the tiller the wrong way and came shooting towards our stern.  Dad leapt off the front and tried to push their bow away, but too late.  With much revving of the engine (we think it was out of gear by this time)  he crashed into our rear.  Luckily, the chain and rope took much of the impact, and our rudder seems okay.  It was one of those situation where you could see exactly what was going to happen, but were powerless to do anything to stop it.  Only 2 hours out and a ‘coming together’ already!  Lets hope that isn’t a taste of what’s to come on this trip. 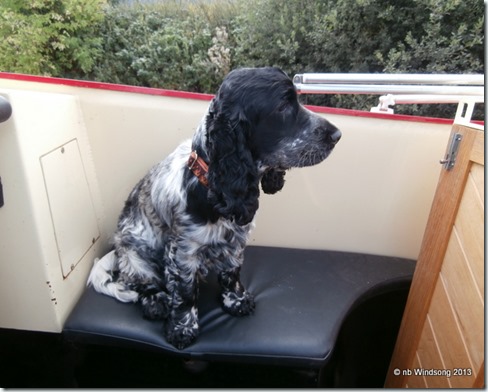 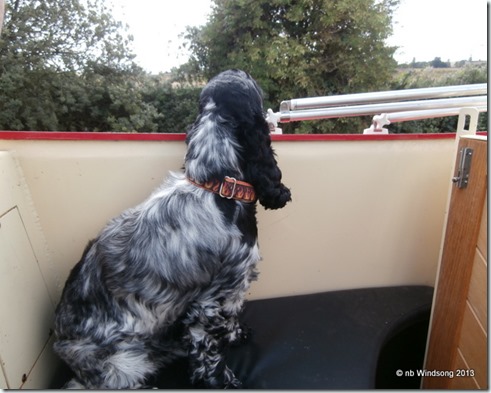 Ozzy seemed happy enough sitting on the locker taking in the view, and showed great interest in the cows and sheep in the fields.  I think we was a tad confused though.  We’ll see how he settles for his first night aboard.  We’ve brought his crate, which is on one of the dinette benches, and he’s used to sleeping in that, so I think he’ll be okay.

Whilst I’ve been writing this, our peace has been shattered by a very noisy combine which has started up in the field the other side of the hedge – I hope the harvesting doesn’t go on all night!!

I won’t be posting this tonight as we haven’t set up the internet aerial yet, so you’ll be getting a double helping tomorrow.

We’ve decided that we are going for it!  I think that while my wrist is by no means back to normal, it is up to most of my boating ‘duties’, bar perhaps, pulling hard on a rope!  We plan to leave Gayton Marina around the 29th or 30th August, in time to get to Barrow on Soar for the Beacon Boats meet on 7th September.  So, watch this space, I’ll soon be back to blogging regularly for a few weeks.  If anyone is planning on travelling up that way from the Northampton area and would like to travel with us to share those difficult wide locks then please get in touch.