It was a sad day today when I read the last blog update from nb Caxton.  Several months ahead of nb Windsong in build, we followed her build faithfully, feeling a special affinity as she is Barnowl’s No 9 Boat, and we are Beacon’s No 9 boat.  As we got to know Lesley and Joe better, Lesley and I found that a lot of our idea’s of what we wanted from a narrowboat coincided.  However, Lesley and Joe fairly soon discovered that they wanted something different, and nb Yarwood was born.

So farewell nb Caxton – if and when we see her again she will have a different name – nb Manley Ferry. We hope her new owners enjoy her – we will give you a wave when we see you out on the cut.  We will enjoy following, and hopefully sharing in some of nb Yarwood’s adventures.  See you on the Fens Lesley and Joe! 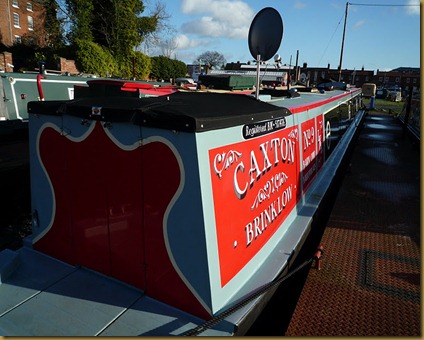 Further to Cassie’s specialist appointment in November, and the blood test results, a new drug called Keppra has been added to her regime.  As this drug is expensive, our vet suggested that she give us a private Vet prescription which would enable us to buy the drug at the local chemist – it turns out that it is between 50% and 100% cheaper that way.  Pet Plan have approved the addition, so we are buying the drug (£103 per month) and claiming it back.  The only thing that sticks in my craw is that this new vet charges for filling in the Pet Plan claim form!  We have used numerous vets around the country over the years, first with our old retriever Rosie and now with Cassie, both insured with Pet Plan, and never before have we been charged to have the form filled in.  I understand the theory behind it, as it does take up the vet’s time, but if it’s that time-consuming, why don’t more vets charge?  I spoke to the Practice Manager (an accountant, what a surprise!) and his explanation as to why they charge when most vets don’t told me nothing, peppered as it was with many ‘with respect’ phrases.  However he did say that they were currently re-working the charges, so perhaps they have lost customers  through this already.  Anyway, we need to stick with it until this 6 month prescription has expired then we might look around for another vet who doesn’t charge to fill in the form.

Anyhow, back to Cassie.  She had gone six weeks without a seizure, and we were just beginning to relax and to believe that this drug might actually be working, when she had a fit early last Tuesday morning.  She wasn’t right all day, and threatened another fit on Tuesday evening which never happened, then had another at 5 am on Wednesday morning!  She seemed back to normal by Wednesday lunchtime.  So now we just wait to see how long it is until her next one.  Not sure which is preferable - 2 or 3 fits in a ‘cluster’ every 6 weeks, or one single fit every 2 to 3 weeks!