Ozzy is home from hospital!  Apart from looking like a car crash he seems to be fine.  He HATES his ‘lampshade’ and is spending most of his time time trying to get out of it.  His wound is very swollen but will go down over the next few days, and when his hair grows back he’ll look much better.  Here he is giving me evils because I won’t take it off! 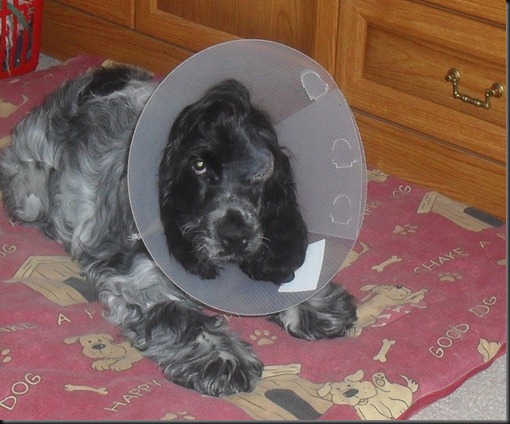 Some of our regular readers who are on Facebook will already know that Ozzy has had a problem, but for those of you who don’t, I’ll start at the beginning.

On Thursday last, Ozzy didn’t seem quite his normal self and it was obvious his mouth was hurting as he squealed when he tried to pick up toys and dropped them again quickly.  When he woke after his morning nap his left eye was slightly swollen.  We took him to the vets, and after a thorough examination it was decided that he had a conjunctivitis type infection and a sore mouth due to teething.  We went home with painkillers/anti inflammatory tablets and eye drops.  On Friday morning his eye looked a lot better and he was back in normal ‘cockerdile’  puppy mode.  Saturday saw a downward turn again, but his eye still didn’t look any worse.  Sunday morning arrived and it was immediately evident that another trip to the vet was required as his eye had swollen up considerably overnight, so we cancelled our plan to meet up with the crews or nb Yarwood and nb Matilda Rose, and off we went to the vets.  After tests to check the pressure in his eye, he was referred to the Willows Veterinary Hospital in Solihull, and the afternoon saw us driving up the motorway to keep a 4pm appointment.  He was seen by a wonderful lady specialist called Christine, and before too long she had examined him and given him an ultrasound scan.  The verdict was dismal!  His eye was already damaged beyond repair, and his retina detached.  There was also a huge amount of infection.  He was kept there overnight, and given large doses of antibiotics, but this morning he was worse so they went ahead and operated to remove his eye and drain the infection.  They discovered a nasty barbed grass seed which had penetrated the roof of his mouth behind his last molar and gone up into his eye!  He is now recovering from his op and, all being well, we will be able to collect him and bring him home tomorrow.

Obviously, we are shocked and devastated by all this, but we do know that he will do perfectly well with just one eye, and he will be all the more special to us because of it.  The one bright spot in all this is that it isn’t glaucoma, where he would have lost the eye anyway and the other would have been at risk in the near future.  He has been such a brave little boy, given how much pain he must have been in!

We aren’t sure how much more dog-related trauma we can take, so we hope that he will be healthy in the future.  Our last 2 Golden Retrievers were been really unlucky in regard to their health. We were hoping that in having a change of breed we would be ‘third time lucky’…obviously not.

A day with Shirl and Andy….

Our friends Shirl and Andy came to visit on Saturday, so we took them out on the boat for a trip to Bugbrooke, lunch in the Wharf pub, and a trip back again.  A lovely day was had by all, with much chat as we caught up with each others doings over the past year or so since we had last got together.

It was also Ozzy’s first trip to a pub, so armed with cow’s ear chews we sat and had lunch in the pub garden.  Ozzy behaved well, apart from occasionally trying to cut us all off at the ankles as he got tangled in his lead while under the table!  He slept for a time back on the boat, having squeezed himself under the back steps, but soon wanted to come back out with us. 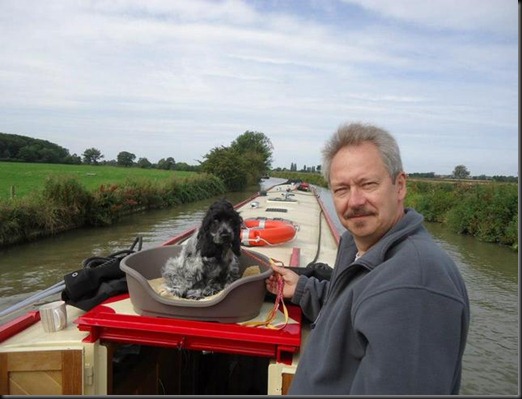 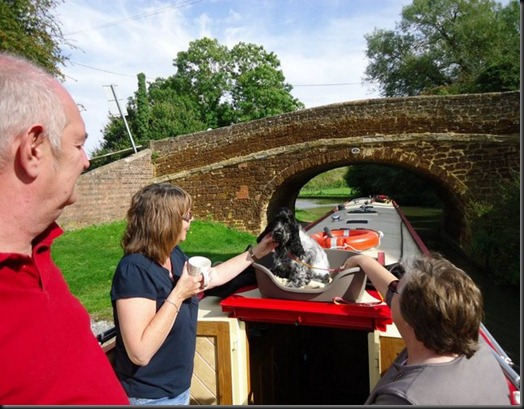 The rest of us!