If anybody spots this fine, upstanding young man, in combat uniform, somewhere on the K & A over the next day or two, please give him a wave, and maybe a cuppa!  It will be our son Russ, who has been on ‘detachment’ with the Environment Agency for the last month or so.  Servicemen and women have been seconded to help check flood defences, and Russ is over that way at the moment. 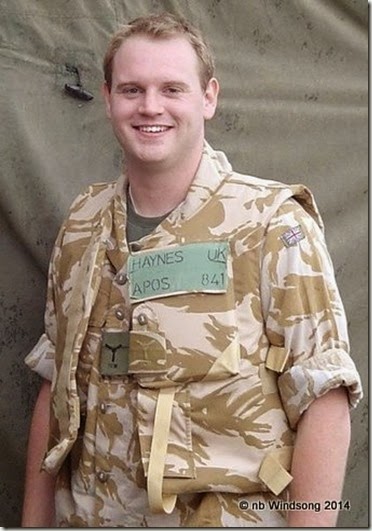 But being a boater I should have expected things not to go as planned.  But, to backtrack…

We packed the car last Friday for our trip home – we enjoyed our extended holiday in France, despite the rain, and we very sad to be leaving.  We set off about 12.00 and tootled up as far as Tours, where we  had booked a room at a Campanile for the night.  Sunshine and showers accompanied us all the way, including one horrendous hail-storm, so loud that we couldn’t hear Naggin’ Nora, and could barely see the road in front of us.  Luckily, we only had to stay on the same road so we soldiered on.  Our room at the Campanile was basic to say the least, but in typical motel-style, it opened directly onto the car park which was much easier with the dog, than having to trog up and down in the lift every time he needed to go outside, as we had to do when we stayed at an Ibis on the way down.   At least it had a kettle so we could make tea and coffee.  We didn’t fancy what was on the menu in the restaurant at the hotel, so we went out and found a burger joint and demolished burgers and frites for our evening meal – very healthy (NOT)!

We didn’t have a very long journey on Sat, only about 3 hours up to just north of Rouen, so we tootled again, enjoying the sunshine, making lots of stops to let Ozzy have a pee and stretch his legs.  He really is the most brilliant of travellers, from the minute we put him in the car, we never hear a sound from him unless we stop, and then he might just give a little bark.  We really don’t know that he’s there, no whining, or panting or being sick.  The best canine traveller that we’ve ever had!

Naggin’ Nora saw us around the outskirts of Rouen and over the bridge without any problems this time, unlike our outward journey, then decided to give up the ghost just as we were about to turn off the motorway to find our next Campanile for the night.  Luckily, it was well signposted and we found it without problem.  It was in the middle of the hugest trading estate I’ve ever seen, and possibly the busiest roads we’ve seen since arriving in France.  Rog reset Nora when we had unpacked and said it was fine, so we didn’t give it another thought.  We went for a look around after we’d had a cuppa, to see if there was anywhere to eat and found that the trading estate was definitely not designed for people on foot as there were no pavements anywhere and it was really difficult to cross any of the busy roads.  After an hour we gave up and went back to the hotel, having only found another branch of the same burger-joint we’d eaten in the night before, and a KFC.  As it was so difficult to actually walk anywhere we decided to eat in the hotel.  Dinner was passable, but nothing to write home about.

And here’s where the best laid plans went awry, and Rouen ‘bit our backsides’ yet again!  The whole idea of stopping north of Rouen was so we didn’t have to worry about it with a deadline (the Eurotunnel booking)  We had hoped to continue northwards, but unfortunately we had to backtrack just a few kms towards Rouen.  Naggin Nora decided to lock up again in the exact same place as on the previous day (we decided afterwards that the large power station and numerous high voltage power cables in the vicinity were the culprits)  By the time we’d managed to get it up and running we’d missed our turnoff, and were heading straight for the centre of Rouen again!!!  However, we were careful to obey Nora to the letter, and she in turn saw us through, but not without a few hairy moments.  We ended up on the same road that we’d had to do an illegal ‘U-ey’ on the way down!  Rouen is a traffic nightmare, even on a Sunday morning, and we shall try to avoid it like the plague if we ever go that way again!  Once out the other side it was all plain sailing up to Calais and the Eurotunnel.  We were early so were offered passage on the crossing an hour earlier than booked, and were back on home soil by 1pm UK time.  A decent run home up to Northampton saw us indoors by 4pm having stopped on the way at Maidstone services for some lunch.

So, back to real life.  Plans for our Summer cruise are still not finalised, it all depends on family stuff.  But for now, this is us, signing off until next time.