On Monday morning, bright and early due to our body clocks still being on British Summer time, we waved goodbye to Gayton Marina for the last time and set out for the short trip to Brinklow Marina, which is to be Windsong’s new home. 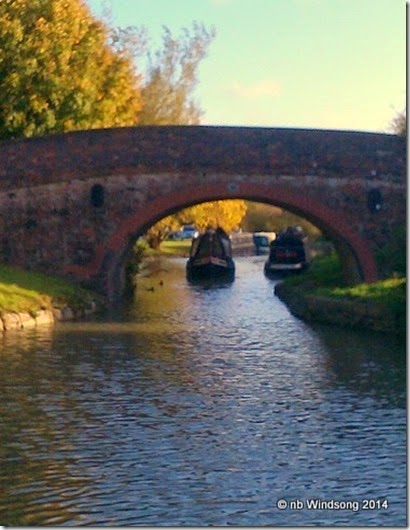 A last sight of Gayton Marina on the left through the bridge, and the Northampton Arm of the GU

It was a beautiful morning, if a little on the windy side,  and we made good time, sharing the Buckby lock flight with a charming couple who’s boat name escapes me now!  We managed to bag our favourite spot at Norton Junction, just past the water point on the Leicester Arm, and moored up just after 3 pm 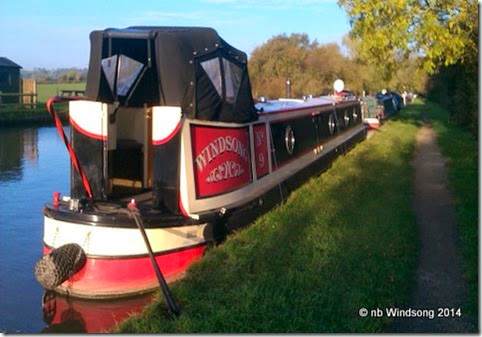 Our mooring for Monday night

On Tuesday morning, we again set out reasonably early (for us!) with Braunston tunnel and locks ahead of us. 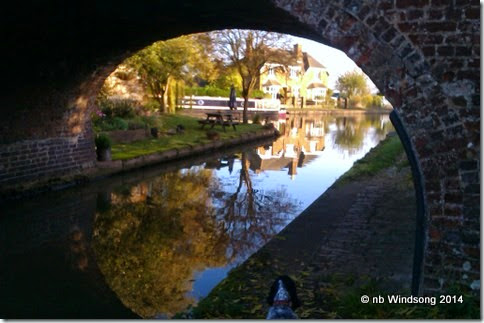 Rog reversing out of the junction

Another glorious day, and again we made excellent time, down Braunston Locks in record time.  We contemplated making the most of the weather and cruising on until we reached Brinklow.  Just north of Braunston that all went for a bag of rats!  Having turned onto the north Oxford, and stopped at Midland Diddlers Chandlers for a new TV aerial, we rounded a bend and were confronted with this: 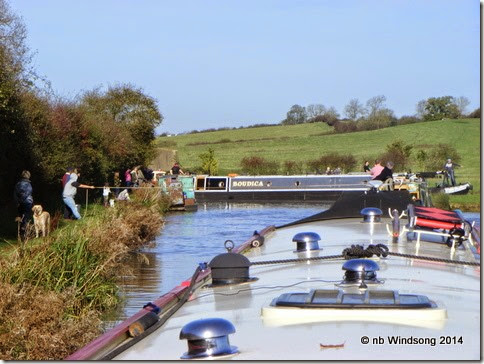 Nb Boudica was stuck fast across the full width of the canal, having tried to turn a 65 foot plus boat in an ‘unofficial’ winding hole, only big enough to turn a 45 foot boat! 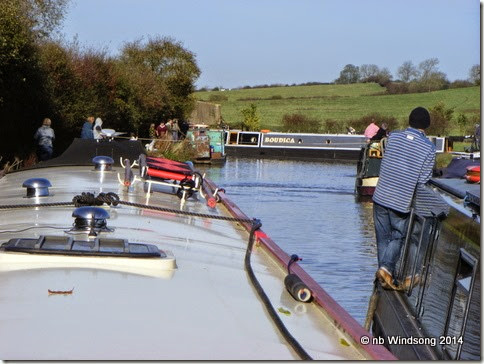 There were boats everywhere, pulling, pushing and trying in vain to shift her.  Apparently she’d been there since 8.30, and it was now heading for 12 noon. The very embarrassed skipper had been assured that it was an official winding hole – he’d had only had the boat since the day before.  He’d been trying for several hours to get hold of C & RT and only managed to get someone to answer a phone shortly before we arrived!  As you can imagine it was chaos, with one very officious lady  trying to direct all the other boats to move backwards by waving her arms at us all.  Those of you who know Rog will know how well that went down!!!  We couldn’t moor where we were as we couldn’t get anywhere near the bank, so, after about half an hour with no sign of going anywhere any time soon, we reversed back several hundred yards and moored up.  C & RT arrived about an hour later, and with the help of a couple of boats moored close by, managed to direct operations and jerked Boudica free.  By the time the logjam was cleared – 14 boats heading southwards and 8 heading north, it was about 3 o’clock and as we had a nice mooring, we couldn’t be bothered to set off again so we stayed where we were. 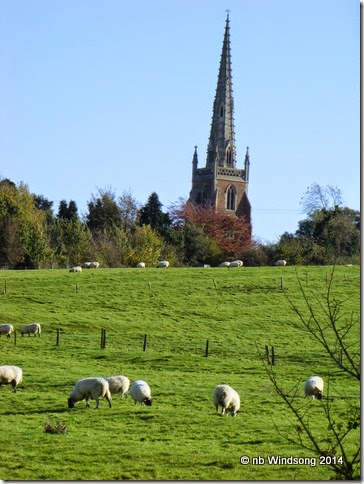 This was the view from our side hatch – the iconic Braunston Church with it’s accompanying sheep – what a lovely pastoral view!

On Wednesday morning we set off in drizzle which soon turned to persistent rain.  By the time we reached Hillmorton locks it had stopped though, so I managed to keep dry whilst working the locks.  Through Rugby and we reached Brinklow Marina around 1 o’clock – just in time as it turns out.  We got moored up on our pontoon, and the heavens opened yet again.  We lit the fire and snuggled down for the afternoon.

This morning at 9 o’clock Rog got a lift into Rugby, caught the train to Northampton and a taxi back to Gayton Marina and collected the car.  He was back at Brinklow by 11.20.  Meanwhile I played host to David Ritson who is going to do our saloon alterations starting mid November.  He came to check that the flooring we had found would be a good match with what is already there, and ended up taking all the skirtings off before he could check the thickness!  But it’s all good, so now we just have to order it.

So, that’s it for this year’s cruising, folks.  See you next year.