At last we woke to a sunny morning, and we decided to make the most of it.  We have been visiting local supermarkets and other shops just to keep dry over the last few days, and poor Ozzy hasn’t had much of a walk, only just along the road on the lead since we got here. So we decided to go and find somewhere to give him a good off lead walk.  This is where we went: 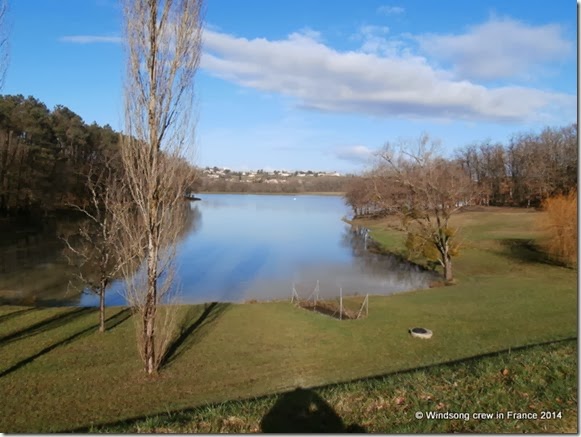 This Lac De Gurson – about a 15 minute drive from our gite.  It’s a local tourist attraction with swimming, tennis, fishing, a restaurant etc.  Of course nothing is open at this time of the year, so it was lovely and quiet.  There were at least half a dozen cars parked in the car park, but we didn’t see any people.  We walked half-way around the lake and Ozzy had a good run to stretch his legs.  We walked back the way we had come as the path was good, and further on it was a quagmire.  We’ll go back again in a few days and hope that it has dried out a bit and walk all the way around.  Ozzy has tired himself out, and is now fast asleep,drying out in his crate as he was horrendously muddy.  The ground is saturated after several days of almost constant rain and, being clay, is very claggy – even normally dry paths are a sea of mud!  Still, hopefully we’ll have a bit of dry weather and be able to get out a bit more over the next few weeks.  Watch this space!

We left Alencon at 8.15 yesterday morning, in the dark, in the piddling rain and thick mist, without even a cup of tea or coffee inside us!  No way were we paying the Ibis price of €9.50 for a croissant and a cup of tea or coffee!!!  The town centre was absolutely dead – we could have been leaving at two in the morning for all we knew – in fact I checked the time, thinking that something had gone wrong with Rog’s watch!  Straight back onto the motorway, which was also quiet, at times we were the only car visible.  We soon found a rest area with services, so a couple of coffees and a couple of pain-au-chocolate (I think I might get seriously addicted to pain-au-chocolate) and we were sorted.  The motorway service areas have improved hugely since our last trip to France about 15 years ago – gone are the awful holes in the ground that you had to squat over to wee – now fairly clean, modern loos are present at most of them (although apparently the holes in the ground do still exist in some places!).  Le Mans came and went, as did Tours, Poitiers and Angouleme, and we were soon leaving the motorways behind and heading across country.  Naggin’ Nora did take us a rather more rural route than we had expected, but we reached our destination without any major hitches, apart from the time she told us to take a wrong turning off a roundabout as it had all been recently changed, but we realised very quickly and turned around.

We got to Saint Méard de Gurçon in the Dordogne at about 2.15pm.  Our hosts, Lynette and Dave were very welcoming, and after showing us round the gite, they left us to it.  After unloading the car, we headed off to do some essential shopping.  ‘I know where the Leclerc is ‘ said Rog. And he did,  only it had been shut down for some time! so we were reduced to using the Inter Marche.   It was very small, but we managed to get enough stuff for a couple of days.  Having spoken to Dave this morning, we do now know where the Leclerc has moved to – we’ll go and have a shufti tomorrow.

We are planning a few quiet days getting to know the local area, before heading further afield.  It is, after all, still January, and most of France is closed!!!  A few attractions do start to open for a limited time in February.

No photos of the gite as yet as it’s still bloody raining, and I’d like at least a little bit of sun before I start snapping away.

We left Northampton after lunch yesterday, Folkestone bound.  We had a fairly good journey, a bit slow through miles of road works on the M25.  We used the Dartford Bridge crossing for the first time – my God, but it’s high!!  We got to the Holiday Inn Express at about 5pm.  Poor Ozzy couldn’t understand what was going on, got over-excited and tiddled on the carpet!  Good start!  However, he crashed out and slept most of the evening, and didn’t seem to mind being in the same room as us all night.  We got up at the unearthly hour of 6 am, had breakfast, filled the car and were at the Eurotunnel check in in time to catch the train half an hour earlier than the one we’d booked. 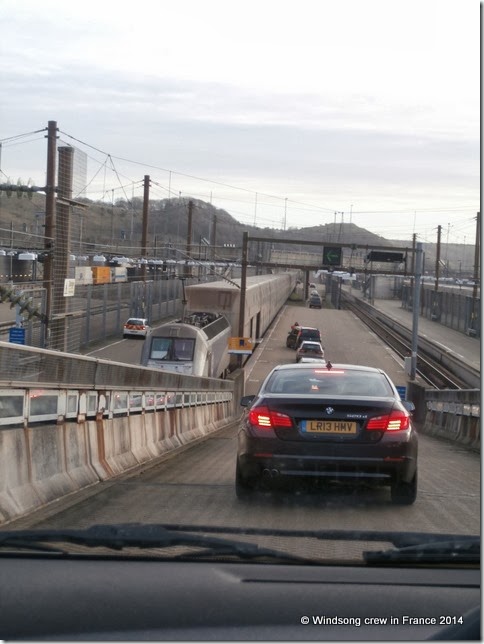 After a very quick 25 minute crossing we were disembarking in La Belle France – weak sunshine greeted us, which didn’t last long. 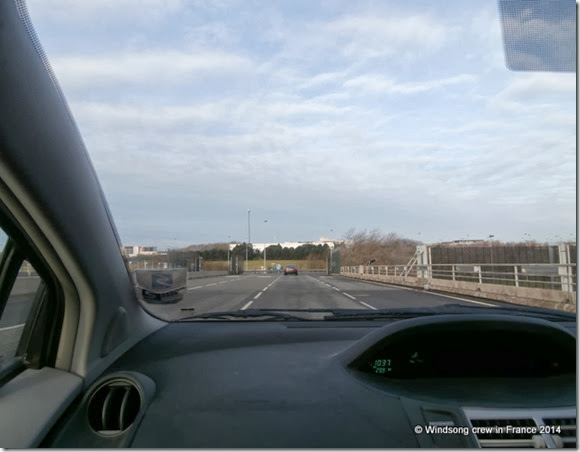 Just off the train, remembering to drive on the right

We were straight on the motorway and heading south.  It was wonderful to drive on almost empty roads 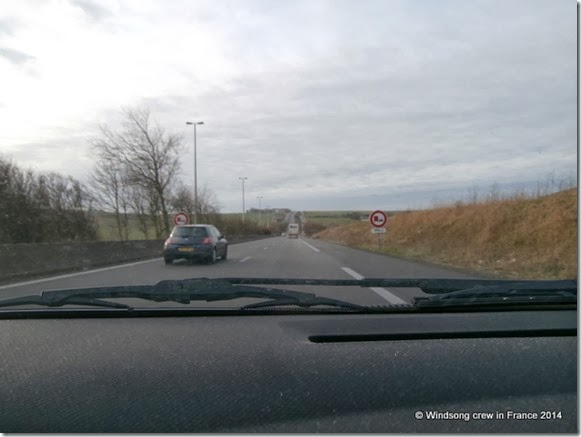 We had another good journey, except for around Rouen – the bridge we needed to use has been closed for some time, and ‘Naggin’ Nora’ the satnav sent us the wrong way, then made impossible demands.  After getting hopelessly lost and doing an illegal u turn, we managed to get back on track and crossed the Seinne  at another bridge.  We were soon back on the right road.  Next came Alencon where we have booked an Ibis Hotel for the night.  It seems that I didn’t make a very good decision, it’s right in the centre of town and I failed to notice when I booked that they have no parking!  Luckily there is pay parking right outside and we were very fortunate to bag a space right outside the door.  We have paid just €2 for parking until 9 am tomorrow morning.  There is no tea or coffee available in the room, which is a disaster for the morning!  I think we’ll look for somewhere else to stay on the way back!.  Also there is nowhere grassy to take Ozzy for tiddles and poohs.  Oh well, I’m sure he’ll manage around the back in a side street just this once.  Onward journey tomorrow.