Having broken the back of the decorating now, we decided that we really ought to go out for the day on the boat and take advantage of the weather.  The forecast is not too great for the rest of the week, so I cancelled my haircut appointment today and off we went, taking Mum with us for a little trip out.  She can’t manage a holiday on the boat anymore as she is not as agile as she used to be, and has great difficulty getting on and off, and negotiating the steps down from the back deck, so a few hours out is ideal.  We were headed for the Wharf pub at Bugbrooke for lunch. 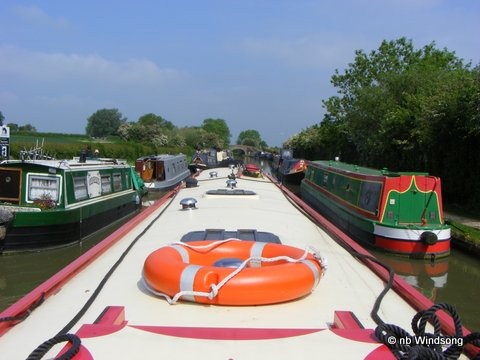 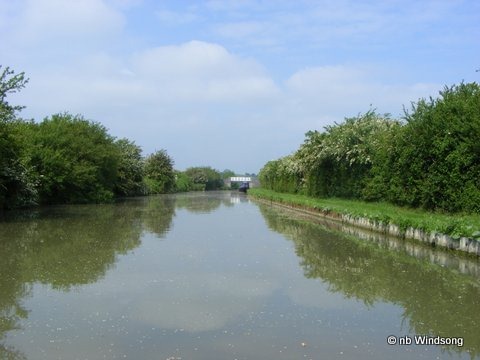 Quiet and peaceful, not many boats about 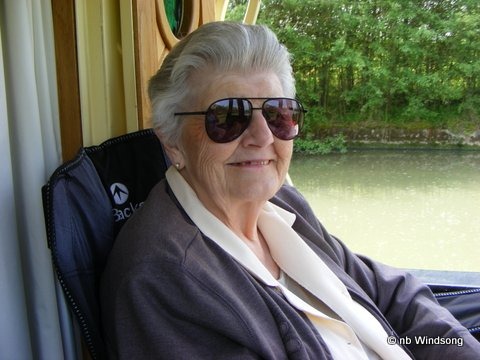 Mum enjoying the view from the bow 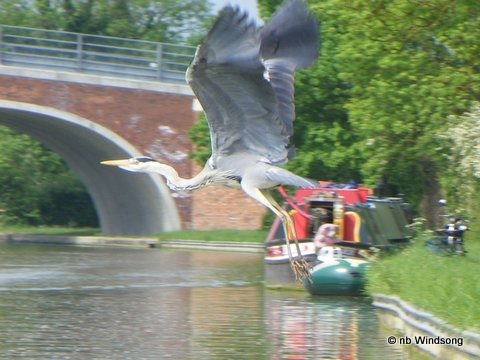 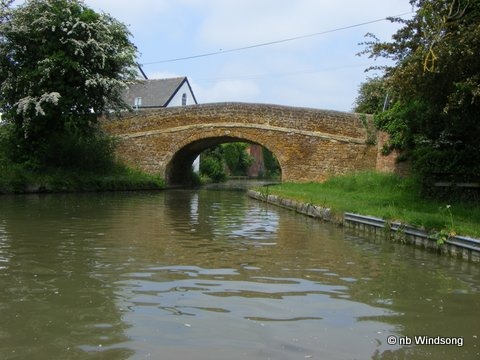 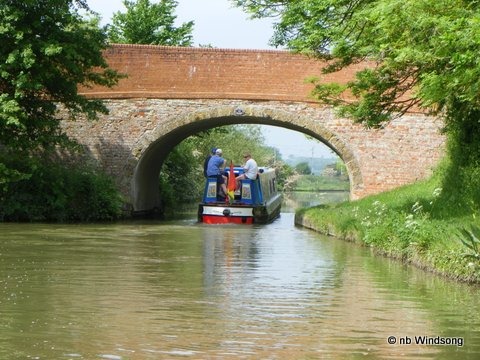 Trapped behind a hire-boat on tickover, completely oblivious (or pretending to be!) to the fact we were almost up their rear end 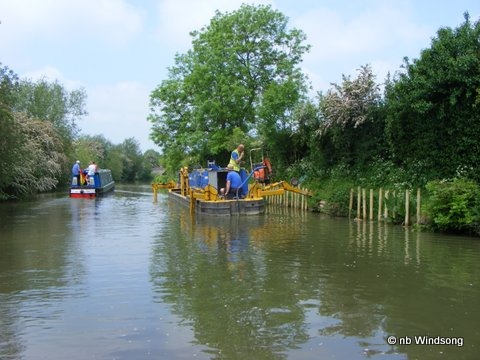 BW (or is it C&RT now?) are doing some repair work on the banks along this stretch – however this was a tea-break! 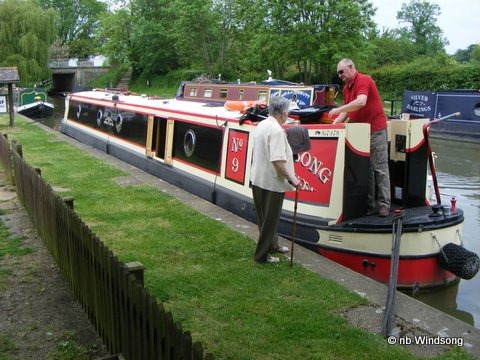 We were lucky and managed to moor right outside the pub

We arrived at the Wharf just before opening and had a lovely lunch outside in the garden.  By the time we left we had seen the best of the day’s weather and it was becoming very humid and overcast, with a few rather ominous looking grey clouds.  However, we got back to the marina without the threatened shower and a good day was had by all.

At Foxton with Trish and Peter….

Today we managed to make our delayed visit to Foxton to meet up with my old (she’ll say ‘less of the ‘old’, but you know what I mean! )  school friend Trish and her husband Peter, who have a hire boat for a fortnight.  The planned trip was supposed to be last Wednesday, but they had a sleepless night the night before due to central heating exhaust fumes coming into the sleeping cabin, and they were worried about being asphyxiated.  So they moved to the front cabin, but the bed kept threatening to collapse!  Anyway, the visit was cancelled while they waited for an engineer to come, and re-arranged for today.  And, guess what?  It was raining!!  Typical – Wednesday was a lovely day!

We arrived at Foxton at about 9.40, found the boat and had a coffee, before setting off to join the queue for the locks.  We were no 4 in the queue so not too bad, as the first boat was just starting up.  A bit slow at first as there was a lot of messing about from two Canal Boat Club boats (ex-Anal Slime!) who seemed to be having problems remembering which paddle to open first, so that caused a bottle neck for a couple of locks, but the lockies soon got things moving again.  I had a little drive for a couple of locks just to get my ‘fix’ and then graciously consented to let Rog drive for the last lock.  It was strange to drive a cruiser stern again after so long with a semi-trad.  I’d forgotten how well you can see from the back of a cruiser stern!

Once up the locks, we tied up and walked back down to Bridge 61 where Trish and Peter very kindly treated us to lunch.  A good morning was had by all, and with the promise of  further meetings to be arranged, and a trip out on Windsong, we said our goodbyes and headed home, leaving them to continue their journey. 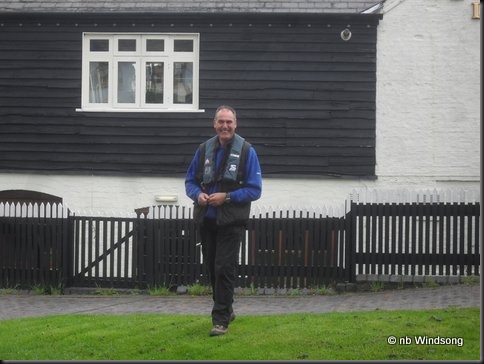 Foxton lockie Gerard Rogers,  long time drummer with 60's stars "Union Gap" of the song "Young Girl" fame (for those of you old enough to remember)!!!! 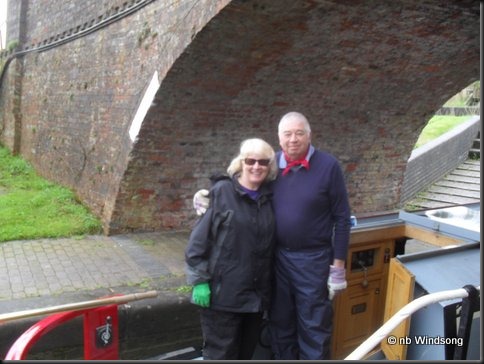 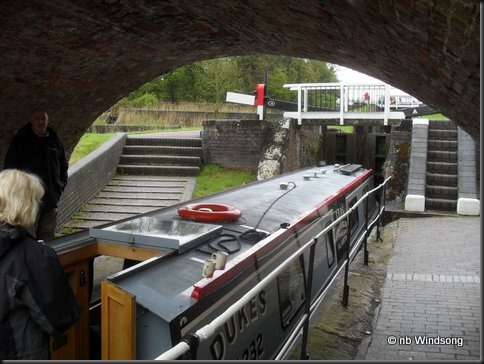 Waiting to enter the first lock 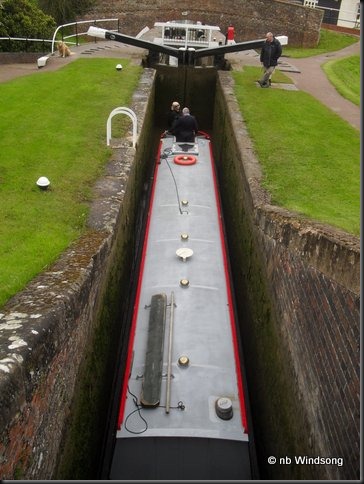 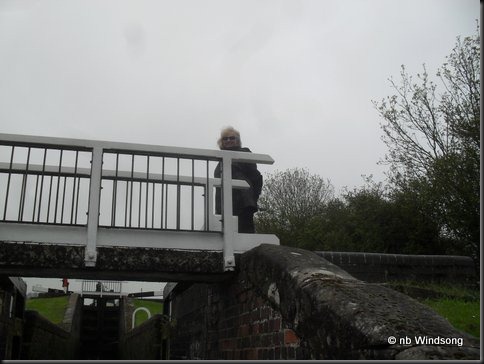 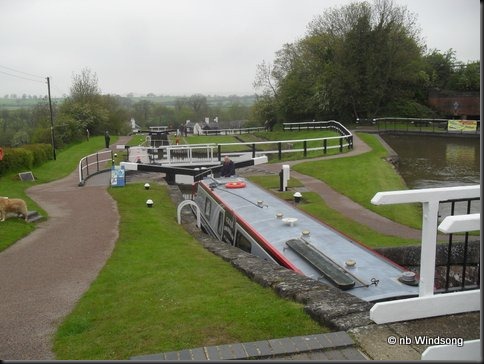 Just past the half-way mark

No more cruising just yet…

This post is by way of letting all our readers know that we haven’t vanished off the face of the earth.  We moved house on 23rd April, but the upstairs is in such a sorry state, decoratively speaking, that we decided to get the rollers and paintbrushes out as soon as we had unpacked. The reason for this is that we couldn’t face going away for a few months on the boat and leaving it as it is, or we would have been too depressed coming back to it. We decided to do the guest room first as there was less furniture to shift from there.  Paint bought and various nails, screws and raw plugs pulled out of the walls, holes filled and sanded, we set to work last Monday.  We are neither of us experts as we have mostly had it done for us, having lived in Forces married quarters for all those years, but we didn’t make a bad job of it – I just never realised how heavy a roller-full of paint is!  I ended up using the small roller on the little bits of the walls.  It’s not quite finished yet, we still have the window sill and the cupboard doors to paint, but we can do them later on.  We took advantage of the Homebase 20% off sale this weekend and bought some more paint for our bedroom.  We have now moved our bed into the guestroom for the duration.  Our bedroom is by far the worst – there is a small piece of coving missing and the ceiling will also need to be painted, as will the skirting boards and cupboard doors.  We think we have found the right size coving (it’s quite small in diameter) so will go and get some to replace the missing bit tomorrow, along with ceiling paint and white gloss for the skirting boards.  Also some masking tape for the carpet – although that is so dirty a bit of spilt paint might be an improvement!  So that is where we are at the moment.  I’ll take some before and after pictures for you all to have a laugh at and post them next time!

0 miles, 0 locks, just a lot of climbing up and down step-ladders!