The good news is that the roof painting is finished, the boat is back on her mooring and looking good…. well she will be when we’ve cleaned up the rest of the paintwork! 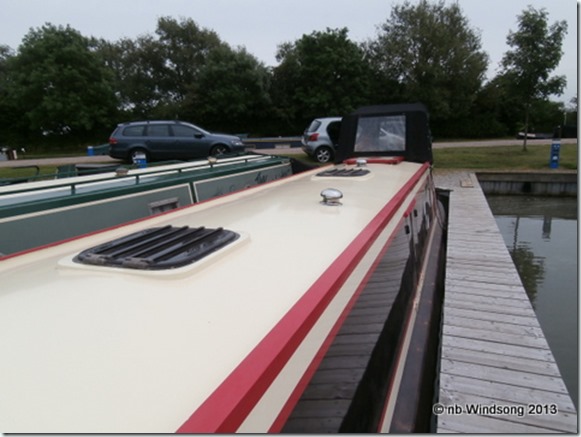 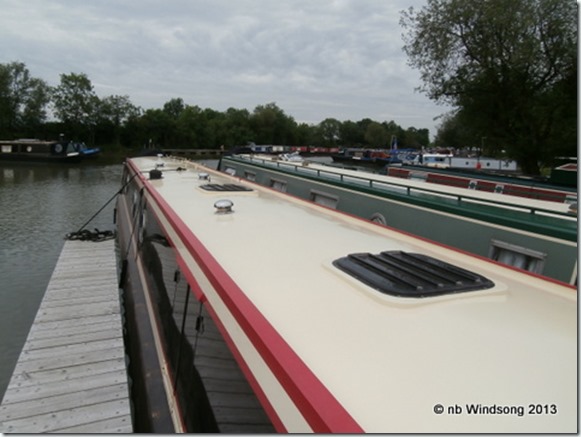 And the bad news is…. we won’t be going anywhere in a hurry because of this…… 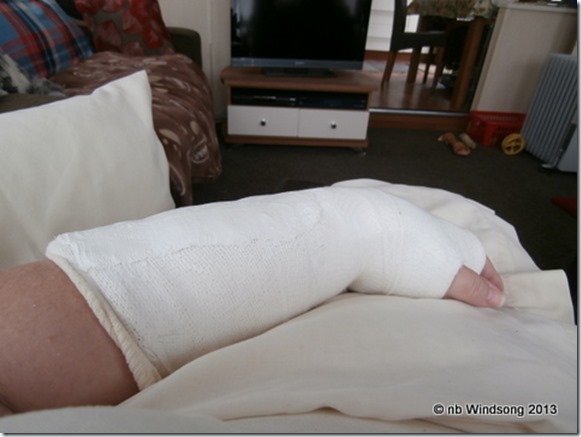 Yes folks, I’ve broken my left wrist!!!!  I did it yesterday, tripped over a tree root in the woods while walking Ozzy.  I’m so cross at myself, for putting a further delay on our summer cruising plans.  It just goes to show what a moment’s inattention can do.  And the eight and a half hours I spent in Northampton General A & E hasn’t improved my opinion of the hospital one little bit!  The department is a shambles, no organisation, with doctors wandering around not knowing where to find anything (the nurses were so overworked none of those I spoke to had had a lunch break by 5 pm!)  Ambulance crews and their patients on trolleys queuing in the corridor, and one poor old lady in her nightie having been brought in by ambulance after a fall fairly early in the morning, sat, all alone, for over 5 hours beside me, bleeding, and nobody even got her a cup of tea!  Also I had to step in and stop an argument between a patient’s son, and a friend, when she started berating him about not spending time with his mum, only appearing when she got taken to hospital!  The argument was taking place only a few feet from me, and was getting louder and louder and totally out of hand, so I just stepped in and said that it wasn’t the time or place.  The lady apologised and the son flounced off for a fag!  Eh, the things you see in A & E!!!  Anyway, my wrist had to be ‘pulled’ to be set, so the doc injected about a pint of local anaesthetic  in, well, tried to, but it hurt so much he had to stop.  They gave me Entinox!  Wow, that’s the first time I’ve ever had it, and it’s good stuff!  I was out of it, but could still hear everything, and feel a bit, but it was a weird feeling, like several too many vodkas!!  Fracture clinic later this week and probably a full plaster then as I’ve only got a back-slab on at the moment.  Hopefully it won’t need pulling again.

So, our cruising plans are on hold again until I’m a bit fitter.  Hopefully we might be able to go out for few days when the wrist has settled and I’ve got a lighter cast on.  We’ll have to see how things go.

Another trip to check out the painting today – the second coat of undercoat is on and dry and the first of the top coats should be going on this afternoon.  I have photos but they don’t look any different to the last ones, so I haven’t bothered to put them on.  The second top coat will probably go on tomorrow unless the first doesn’t dry enough tonight to be sanded down.  Then a third coat if the painter thinks it necessary.  We should have the boat back by the middle of next week.  Then we will have to set to and clean up the rest of the paintwork, which is looking pretty mucky against the new paint.

Went over to the marina again this morning to check progress, so we could have a damn good look as the painter is on a day off.  Looks ok – first coat of undercoat is on.  Obviously the rest of the paintwork is very dusty due to the removal of the old paint and the rubbing down in between coats, but nothing that a damn good wash and polish won’t fix. 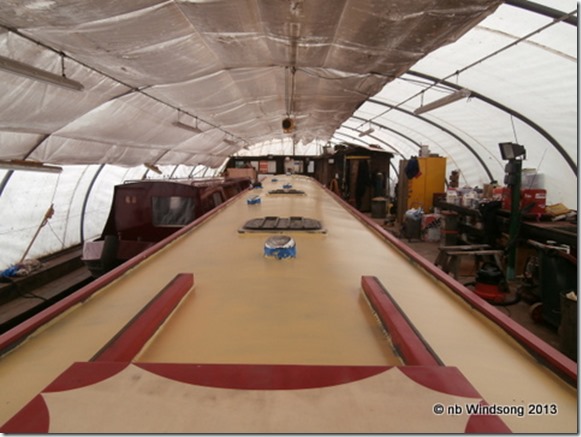 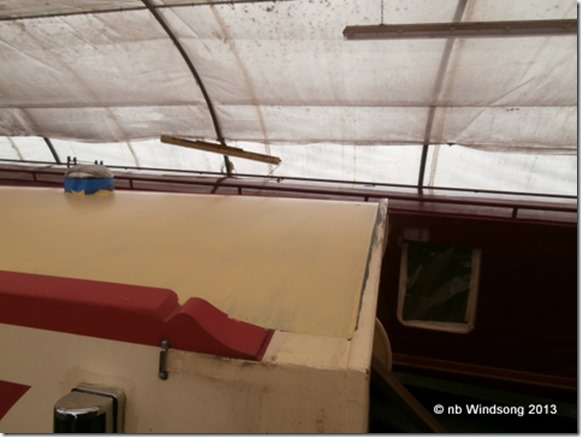 We popped over to the marina this morning to check out the progress on the roof repainting.  All the old paint had been removed and the welds covered with a filler to be smoothed down.  The painter works weekends and has Tuesdays and Wednesdays off so not a huge amount of progress as he’s only been working on it for 2 days.  The old paint came off really easily, “in sheets”, he said.  It looked really odd to see the roof down to the metal, dark as opposed to cream!  Also visible were the marks where the Houdini hatches had been cut in the wrong places by XR & D, the shell builders, and then re-plated when they realised their mistake!  They had measured from the wrong end!  They only found out when they came to place the cuts for the mushrooms, this time measured from the right end, and one of them would have been smack bang in the middle of the hole they had already cut.  Doh!!!  However, they made such a good job of the re-plating that nothing was visible from the outside, although they left the frame strengthening on the inside.  We’ve looked at the photos of the build, pre-spray foaming inside, but can’t really make out where they were.  Ali at Beacon thought we knew, and we may well have been told at the time, but we were in such a state of euphoria at the beginning of the build, that we probably just shrugged our shoulders and forgot all about it!  Anyway, ‘during’ photos, and we will pop back next week sometime to check on progress again. 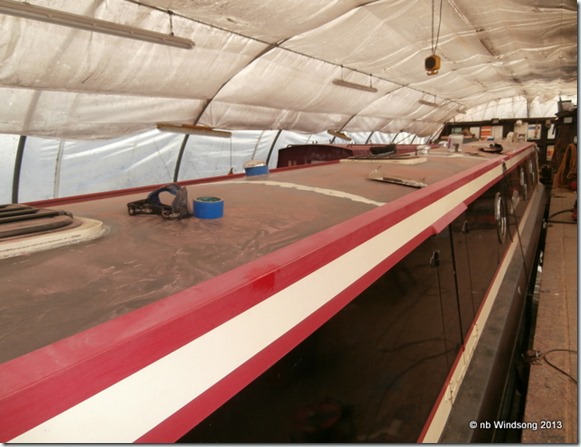 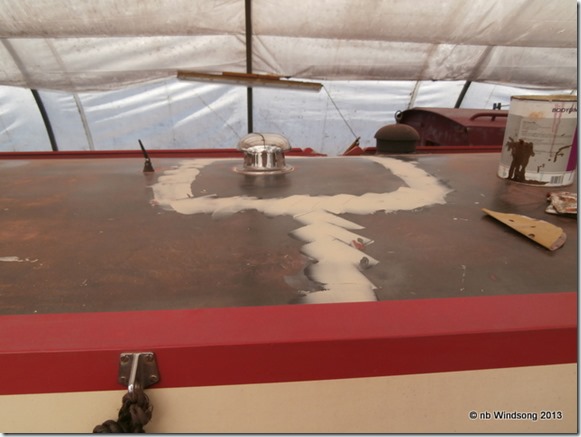 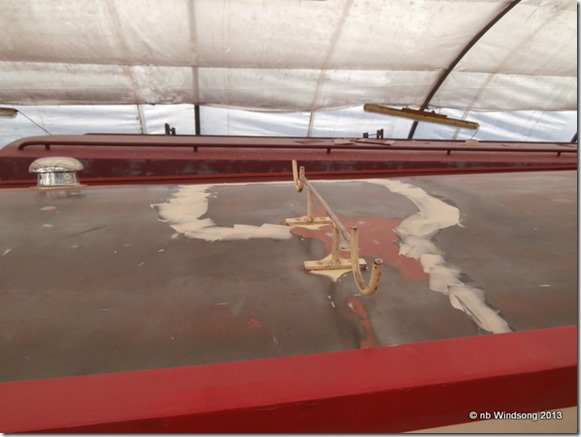 The second and third photos show where the hatches were wrongly cut originally.

In the paint shed…..

We called the marina again at 10am this morning, to be given the all clear to take the boat to the paint shed, but to moor outside because they were going to use the ‘scabbler’ (?) to take the old paint off in the open air as it was a nice day.  We got ourselves over there and set off across the marina.  It was such a gorgeous morning that we wished we were heading for the exit and away!  We ended up going into the paint shed anyway as there was another boat moored where they wanted us – the painter said he’d move her out when it had gone and he was ready to start removing the old paint. 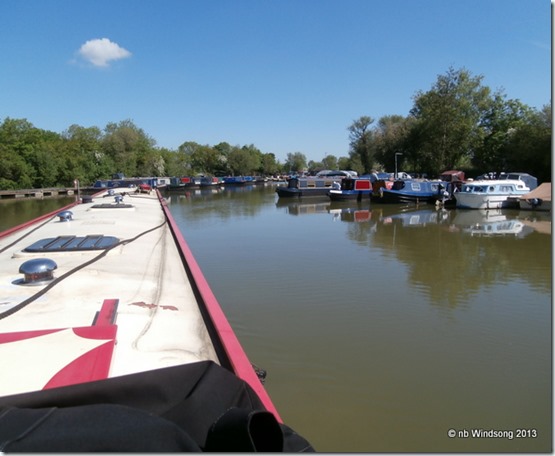 We removed the pram hood and cratch covers and then Rog removed the cratch board.  That proved a more difficult job than anticipated because of the attached cables to the headlight and front well light, but was achieved before too long.  The ropes and the plank/ladder were next, and the cratch and pram hood cover went into the car to be given a good scrub at home.  The ropes will also be given a wash in the machine.  There is a lot of green algae from the winter underneath the cradle which holds the poles and plank but there was no point in washing the roof, the painter said, the muck will come off along with the paint!

So here are the ‘Before’ pictures – ‘During’ and ‘After’ pics will follow as appropriate! 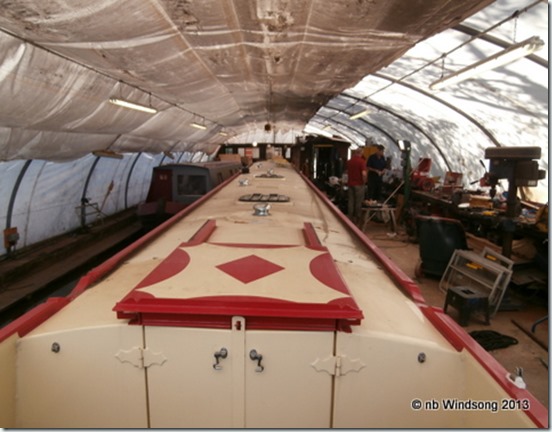 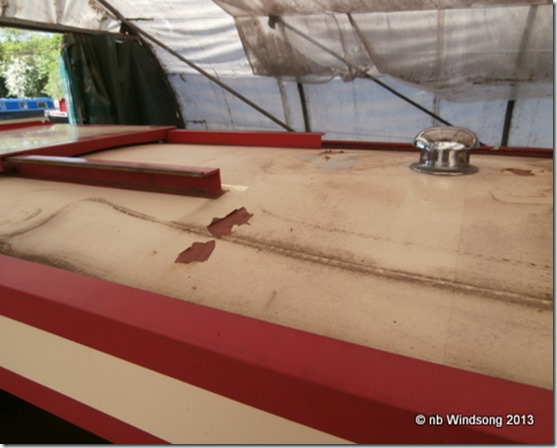 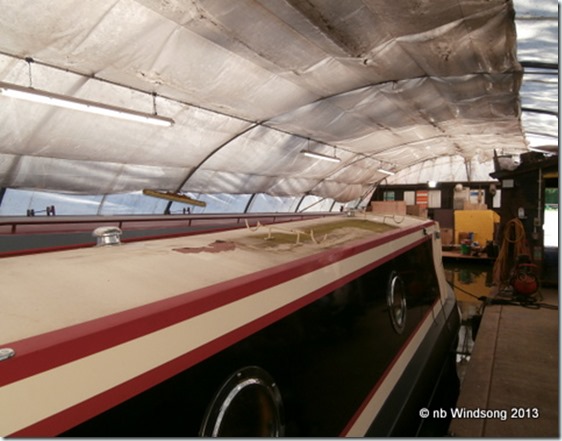 So here we sit. twiddling our thumbs, waiting for a phone call from the Marina to tell us if and when we can take the boat into the paintshop.  Why am I not surprised???