Having been treated to the full range of reproachful looks  from Cassie because she wasn’t allowed any breakfast, we arrived at the Animal Health Trust just outside Newmarket far too early for her appointment yesterday, as we were worried about traffic on the A14. It was a horrible morning, weather wise, thick mist and then rain, but we only got held up once, and arrived almost an hour before her appointment. We did paperwork then went for a coffee to kill some time. The setup at the Animal Heath Trust is very good, with a Visitor Centre and coffee shop.

During her appointment she was given a very through physical examination and we answered loads of questions – the neurologist was Spanish, and a little difficult to understand sometimes, but very good none the less. It was decided than she should have a brain scan and a spinal tap to make sure there were no underlying causes of her seizures, a tumour or infection, and some blood tests to determine the level of medication in her bloodstream. Her scan was not to be until 2 pm, so they took her away to wait – we were told to come back at 4.30. How come that killing four and a half hours is easy when you are doing something that you enjoy, but endless when your are forced to wait?  Also, although we didn’t really verbalise it at the time, we were both worried about what they might find.

We went to Bury St Edmunds, looked round the shops, had some lunch, went to B & Q and still only managed to kill a couple of hours! By this time it was raining so we went back to the AHT, sat in the car and listened to the radio, had a walk, went for a cuppa, and then sat in the reception for half an hour in the hope that we might be seen early – huh, fat chance!!   We had a damp journey home again in the dark, the A14 is horrible at the best of times, but even worse in the dark, but again, not too many holdups.

Anyway, the upshot is that there are no underlying causes of her seizures, so it is definitely Idiopathic Epilepsy. It’s a relief to know that she hasn’t got a brain tumour, but in a way, we wish they had found something that could be treated! We are just waiting now for the results of the blood tests and then it will be decided whether to increase her current meds or to add another one. I hope it’s another because all the increases in her current medication (phenobarbital and sodium bromide) she’s had over the last two years haven’t had much effect.   All this yesterday cost between £1500 and £2000  and the new drug, if she is put on it will be expensive – roughly £100 a month extra.  Thank goodness for Pet Plan!  We have to be prepared for the fact that anything they prescribe for her might not make a lot of difference, 30% of dogs with epilepsy never have their fits controlled to an acceptable degree (which, in the eyes of the veterinary profession, is one fit no more than every 6-8 weeks)

Poor Cassie looks very odd now – she has a large bald patch at the back of her head where they shaved her for the spinal tap – a bit like a monk’s tonsure!  She was a very unhappy dog yesterday evening – still wobbly from the general anaesthetic, and I suspect, in a little bit of pain from the spinal tap, it can cause a headache.  She grumbled and groaned, and we were treated to the full range of reproachful looks yet again for putting her through so much indignity!  She’s much better today, but still a little sleepy. 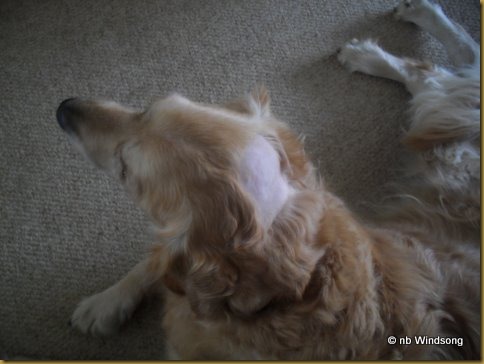 Hope her coat grows back quickly – she looks very odd at the moment!

For anyone who has been interested in the course of Cassie, our Golden Retriever’s epilepsy, this is just a quick update.  All year her fits have been getting closer together, she now has one about every two to three weeks, sometimes more often, despite increases in her medication.  Our new vet here in Corby decided that it was time for her to see a specialist, so she has been referred to the Animal Heath Trust at Newmarket, so see a Neurologist.  Her appointment is on Tuesday morning, so wish us luck.  I will keep you updated as to their findings and opinions. 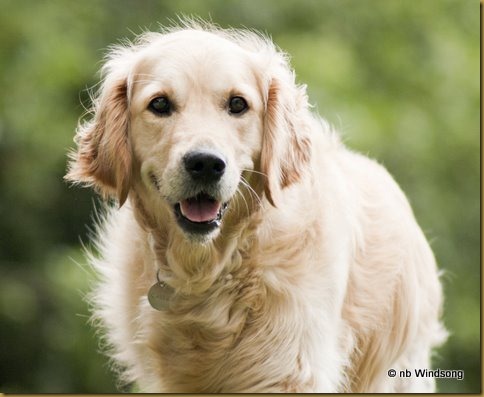