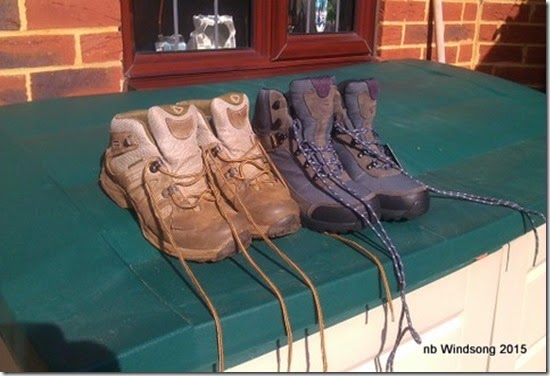 I have new boots!  My old faithful Brashers have begun to fall apart, but that’s not surprising since I’ve been wearing them every day for the last 5 or 6 years!  I had a great deal of trouble buying them in the first place as I have extraordinarily wide feet.  Unfortunately Brasher don’t make that style any more so I’ve had to buy their replacement.  Not looking forward to breaking them in though, they feel rather tight!  But then the old ones did too, when I first bought them – my toes used to go numb for a while before they stretched to accommodate my weird shaped feet.  The old ones are still just about wearable though, good enough to change into when my feet need a break from the new ones.

Rog had an op last Wednesday to remove the cataract that had developed in his left eye.  He has a follow-up appointment mid April, so, as long as everything is as it should be, we can start our cruising year shortly after that.  No real plans as to where we are going this year yet, only that we need to be on the South Oxford at either the summer half term, or the beginning of the school summer holidays as we’ve promised to take our eldest granddaughter Flo, for her first trip as crew for a few days.  At nine and a half now, we think she’s ready, and, if all goes well we may swap her for middle granddaughter Milly who will be eight by then.  Can’t cope with them both at the same time yet, as they get into all sorts of mischief together!

So, watch this space – we’ll be back soon.