Having unloaded yet another car full of gear, Rog braved Tesco for some last minute shopping, and we left the marina at about 1.30pm.  We had an uneventful couple of hours to our planned overnight mooring, just short of Furnace Wharf near Nether Heyford. 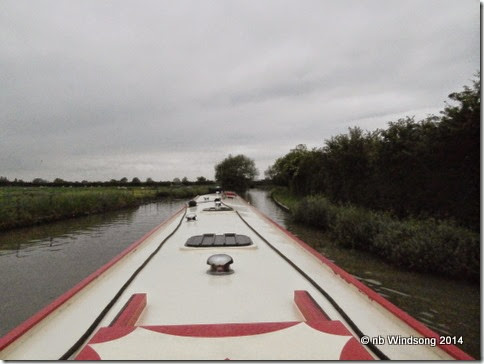 The skies were still grey and overcast, but it was at least dry.  Ozzy settled fairly quickly into his normal cruising spot, up on the side locker, and enjoyed barking at all the sheep and horses in the fields.  Parked cars and people walking also got a good telling off from him, for daring to come anywhere near ‘his’ boat! 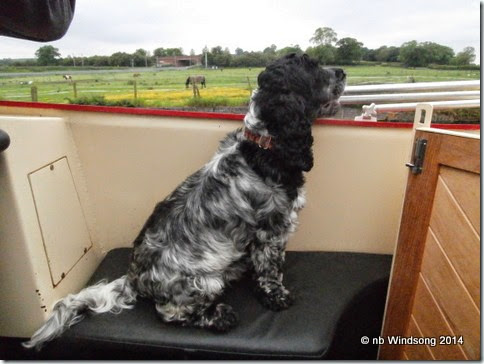 We set off around 9.30, passing the lovely house where I always have to take a photo.  The moorings here are reserved for working boats, otherwise it would be my preferred overnight mooring spot 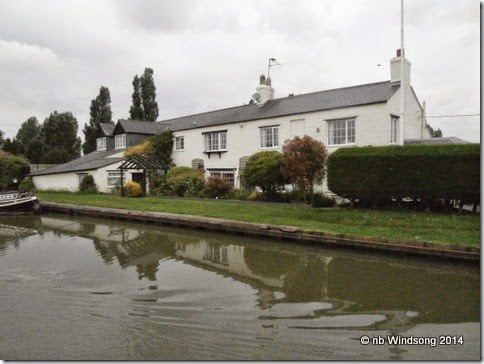 We stopped for fuel at Stowe Hill Marine, as is our usual habit, and then continued to Whilton for the start of the Buckby flight.  As usual there was no boat in front of us, or following, to share with, so we had to go it alone.  However, it wasn’t too bad a trip up the 7 locks as they were either ready for us, or had someone coming down, so there was usually someone to share the work.  I only had to part empty one lock, and that was because the to gates we so leaky that the lock had half filled after the last boat had gone down.  Buckby Wharf was rammed as usual, but as we prefer to moor just a little further on, at Norton Junction, that wasn’t a problem.  We reversed a couple of hundred yards up the Leicester Arm, and  snuggled up between two other boats for the night.  Again a fairly uneventful day. 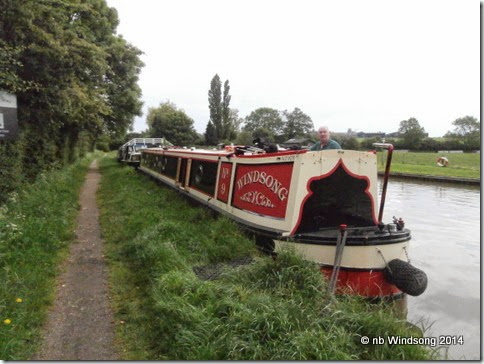 Tomorrow we have a lovely unhealthy brunch to look forward to after we’ve been through the tunnel, and worked down the locks – a bacon and egg sarnie, complete with fried potatoes from the Gongoozler’s Rest, moored just by Braunston basin – yum!

Come hell or high water (and I think the latter is a distinct possibility!) we are leaving for our summer cruise the day after tomorrow!

We had planned to get away a couple of weeks ago, but delayed so that we could see our daughter’s new home and lend a hand with some of the work involved in moving house.  Then we planned to get away early this week, but the weather has been so awful that we decided to delay again for a few days.  But we are just about ready to go now, boat mostly victualed up, just a bit of shopping to do and clothes etc to put on board and away we go.  We could sit here waiting forever at this rate, so we’ve decided to get a shift on, regardless of the weather.

The Webasto is fixed, costing us somewhat more than we had bargained for – not much spent on parts, just some new seals, but a good 10 man-hours involved in finding and fixing the diesel leaks – plural!  The fuel has been turned on now for over a fortnight and no sign of a leak so far, which is promising.  So now we can have hot water for our morning showers without waiting until after 8am so we can turn on the engine to heat the water.

The ‘plan’ is to head up the GU, N Oxford, Coventry, T &M to the Macc and the Peak Forest, as far as Bugsworth and maybe further.  We then plan to turn around and retrace our steps onto the T & M, and go to the Shroppie via the Middlewich Arm.  All things being equal, we will then return home via the Staffs and Worcs.

Rog has an appointment at the Eye Clinic at the hospital in early August, so we plan to be home by then, but with the option of him getting the train back to Northampton if we feel we’d like to stay out for longer.  All depending on how Mum copes while we are away, of course.

We have an Autumn cruise planned as well.  When the kids are back at school we are going to head off again, not sure where yet, but the cruise will end at Brinklow Marina just north or Rugby, where we plan to moor the boat.  We’ve decided to move it as we are getting fed up of having to do the Buckby Flight every time we want to go north.  The advantage is that it will also get rid of the necessity of doing the Brauntston Flight and the tunnel.  An added bonus is that it will cost us £400 a year less than Gayton Marina, but still be in easy reach of home by car during the winter.

So, watch this space, the blog will recommence sometime over the weekend.

Yes, we are still around…..

I’m sure all our readers will be wondering what has become of us. We have de-winterized the boat and are all set to start cleaning her up for the summer season.  When we went up to Barrow last September for the first, and probably the only,  Beacon Boats get-together, our Webasto boiler decided to pack up working.  We didn’t worry too much as we knew it would probably need a service soon.  We didn’t need to heat the water as the engine will do that, and we didn’t need the central heating.  It turns out that the anti-freeze that was in the system had reacted to the metal and had crystalized, blocking the pump.  It’s been cleaned out, some piping replaced and 3 diesel leaks from the system that have been there since launch have finally been stopped (we hope!).  We have yet to receive the bill, but are hoping it won’t be too big as there were no expensive parts needed!  We are going to try to get down to give the boat a good fettling over the next couple of weeks, and then a short day trip out that we have promised some friends, and then, all things being equal (Mum’s health especially!)  we will be all set to embark on a longer cruise this year.  What with one thing and another, we have only cruised for a total of 7 weeks in the last two years, so we are hoping to get out for longer this year.  Watch this space, we will be back blogging soon.

In case anybody out there hasn’t heard – our builders, Beacon Boats have sadly launched their last boat and closed their doors for the last time, due to the continuing ill health of 50% of the staff.  The business has been wound up in the correct manner, with no unfinished boats, no outstanding debts, and all deposits for future build slots returned to some very disappointed customers.  We wish both Ally and Neil all the best for the future, and say thank you, once again, for building superb boats.  The industry will be all the poorer for your absence from it.